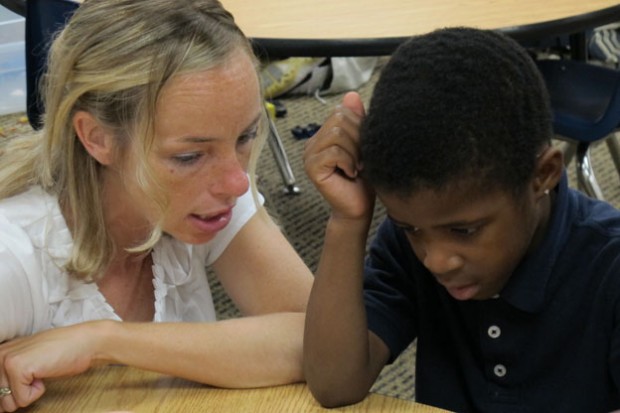 A teacher at Christel House Academy in Indianapolis.

Any new teacher contract signed in Indiana must now include a system for evaluating teachers — and school districts are holding their breath, worried the whole thing could turn into fiasco.

Their fears aren’t unfounded. Implementations of teacher evaluation systems this year in Tennessee, New York, and Florida have been troublesome.

But research released this week argues evaluations are important in making teachers better — especially for educators working with kids from preschool to third grade.

And that evaluation, the researchers argue, can’t consist only of test scores.

The New America Foundation, a non-partisan think tank, writes evaluating teachers based on observations — not just student performance data — is important to make sure young children are engaged:

[The report] paints a picture of the dismal state of early education for many children —especially the disadvantaged — who are rarely given access to the kinds of stimulating, content-rich conversations that provide them with the cognitive and social-emotional skills they need to succeed throughout their years in school. With many states currently redesigning their teacher-evaluation systems, the report urges policymakers to include objective observation-based assessment as a measure of teacher effectiveness. Observation tools allow for measurements that are far less subjective than many of the checklists and rubrics currently used today.

Opponents of teacher evaluation systems have found ample room in the media to voice their concerns:

“I think [merit pay] tries to institutionalize a process that we know. We’re working with children, with their lives at home, and all of their capabilities they bring to the classroom.  [Teachers] are not widgets, they’re people,” she said.

Edu-blogger Joanne Jacobs wonders whether evaluations are “ready for prime-time.” The New York Times wrote last week evaluators in Tennessee were “following the rules for [teacher] evaluations off a cliff.”

That said, Tennessee had to implement its evaluation system quickly after winning a federal grant. Indiana’s teacher evaluation system is being implemented gradually — it’s in pilot testing in six districts this year. Districts statewide will start implementing the system next year.

The conservative American Enterprise Institute also argued this week it may not be fair to dwell on the negatives of the evaluation systems in states like Tennessee — and requiring more rigorous evaluations is a necessary step towards making schools better:

For far too long, definitions of high-quality teaching have been local, variable, and superficial—and often focused heavily on matters other than instruction itself. District evaluation criteria often list dozens of elements, yet only a handful of those elements cover classroom work with students. And many of those lean heavily on superficial aspects of teaching quality, such as whether the teacher recorded the lesson objective on the board or asked three open-ended questions… Reforming the evaluation system will bring about the greatest success not through carrots and sticks but through resources to help teachers improve their craft.

What do you think of the idea of putting more rigorous evaluations in place for teachers? What about attaching a teacher’s salary to this evaluation? With Indiana’s teacher evaluations set to go into place statewide next year, let’s start a conversation on this topic — leave your thoughts in the conversation.