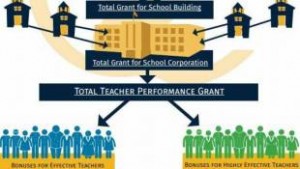 Teachers in some of the state’s richest school corporations can expect $1,000 or more in bonuses, while many of their counterparts in urban schools will receive far less. The state is required by law to hand out $40 million in teacher bonuses, and, this year, much of that money is heading to Indiana’s wealthiest districts.

Local superintendents, teachers and the state union leader say a formula approved by state lawmakers to calculate teacher bonus pay has caused inequalities for how the annual performance-based grants are distributed this year.

Even as state leaders and educators agree the soon-to-be replaced ISTEP is flawed, results of the exam are the main factor in determining how much money a school receives to reward top teachers.

Basically, the formula ties the 2016 ISTEP pass rate and graduation rates at each eligible school to how much money a district receives for bonus pay. Only teachers rated as “effective” or “highly effective” are eligible for the bonuses.

State Superintendent-elect Jennifer McCormick said she expects to address the formula in the upcoming legislative session.

Wayne Township Superintendent Jeff Butts said it’s frustrating that performance grants are determined by ISTEP pass rates, an exam not intended to evaluate teachers. This grant is the Department of Education’s second largest funding allocation, aside from general school funding.

Butts, who is also president-elect of Indiana Association of Public School Superintendents, said the amount of funding correlates closely with the number of poor students in a district — the higher the poverty, the lower the grant.

Out of the 38 corporations in the Indiana Urban Schools Association, 24 were in the bottom third of funding levels, Butts said.

Wayne will receive the second lowest amount funding out of 283 school corporations — just $47,216, or $42 per teacher.

Indianapolis Public Schools, the largest district in the state, will get just $330,875, or $128 per teacher, to reward its top educators.

Funding for teacher bonuses is calculated using a combination of pass rates and year-to-year improvements for state standardized tests and graduation.

If a school had an ISTEP pass rate of 72.5 to 90 percent, the school gets $23.50 in grant funding per test. If more than 90 percent of students passed the exam, funding jumps to $47 per test.
In 2015, anticipating a drop in ISTEP scores due to the new testing format and academic standards, the state also awarded bonus money at some schools for each student who showed 1 percent of academic growth.

But this year, the formula became more difficult. Students needed to show academic growth of 5 percent or more, compared to the previous year, at lower performing schools.

Only 52 percent of students passed both the English/Language Arts and math sections of the ISTEP this spring a decrease from the already low rate of 54 percent in 2015.

State Sen. Ryan Mishler, an architect of the grant formula legislation, said he was taken aback by the funding disparity among districts.

“When we drafted it we didn’t think the gap would be as large,” he said. “The issue is the test,” said the Breman Republican.

Mishler expected ISTEP scores to be on the rise in 2016 and low performing schools would make gains in academic growth. That’s not the case, he said.

“We know there is high performing teachers everywhere,” he said.

Republican State Sen. Luke Kenley, the Senate’s chief budget writer, rejected some of the criticism that this year’s formula relied too much on ISTEP pass rates. Yet he believes the formula should be tweaked to help talented and new teachers earn more money.

“I think the teacher performance award is going to be one of the keys for trying to attract people to the teacher profession and I think we need to define that,” he said. “We’ve gone for literally a 100 years with every teacher at the same amount of seniority making the same amount of money. And we are trying to recognize teacher performance … that means the formula needs to continue to change.”

But ISTA President Teresa Meredith said the formula’s reliance on test scores is a “flawed premise.”

“While educators at well-resourced schools performed well and received a much-deserved bonus, the educators teaching in some of the most challenging districts where socioeconomic factors can negatively impact student and school performance, were left out,” she said in a statement.

Based on 2016 ISTEP scores, and other factors, only $14.4 million worth of bonuses were calculated for this year’s teacher bonus pools. Yet, since state code calls for a $40 million payout, the Department of Education prorated individual school awards to reach the maximum amount.

That increased the grant for Carmel Schools from $870,482 to $2.4 million, according to state data.
Some suburban districts withstood large declines in ISTEP scores. Carmel faced a 2-point drop in scores to 79.8 percent and Zionsville saw just more than 4 points to 76.7 percent.

Around 90 charter schools and traditional school districts did not receive any bonus money. Some of the schools incorrectly submitted paperwork or did not turn in their teacher evaluation guidelines.