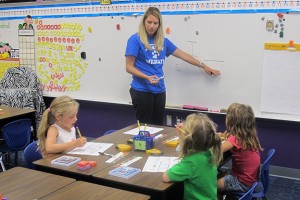 Students at a Jump Start program in Seymour work with their teacher on learning the alphabet. Seymour was one community where the current state funded pre-k program offered scholarships to low-income families. (photo credit: Rachel Morello / StateImpact Indiana)

When the General Assembly convenes for the 2017 legislative session, expanding state funded pre-K will be a top priority.

Legislative leaders have already said they are motivated to expand the pilot program, On My Way Pre-K, which provides tuition scholarships to a limited number of low-income 4-year-olds – 1,792 are enrolled this year.

There are still questions about how far the expansion will go, but details are slowly starting to emerge.

In 2013, the General Assembly passed a bill allocating $10 million to a new pilot program that gives scholarships to low income four-year-olds to attend a high quality preschool program.

On My Way Pre-K went into effect in January 2015, in Allen, Lake, Marion and Vanderburgh Counties. The fifth county selected to offer the scholarships, Jackson, launched its program in July 2015.

The program gives families a voucher they can use to attend any high quality preschool in their town. The Family and Social Services Administration oversees the program, and makes sure every provider involved is rated a Level 3 or 4 on the state’s Paths to Quality system, the two highest rankings.

In the counties where the program launched, the demand far outpaced available spots, showing families wanted this opportunity for their kids but weren’t able to afford it.

Since On My Way Pre-K began in January 2015, it has served 3,702 children in the five counties, and advocacy groups and business leaders have called for an expansion. Legislative leaders agree, but there will likely be debate over what the expansion should look like.

The Request From Early Education Advocates

Through this past year State Supt. Glenda Ritz and former Democratic gubernatorial candidate John Gregg called for universal pre-K, free preschool for all 4-year-olds in the state. This is something that we are not likely to see, however, as neither were elected.

A more likely option is an expansion of the scholarship program. Earlier this summer, a group of business leaders and advocates called for this. The United Way of Central Indiana is also an advocate.

“Four is a critical time,” says Christina Hage, vice president of public policy for UWCI. “Before the age of 5, 85 percent of your brain is developed. If these children are arriving at kindergarten and unable to do the basic skills, then they’re already behind. And there are studies after studies that show it is very difficult to catch up.”

A main point for those advocating for the expansion is the cost-benefit argument. UWCI commissioned a report from Indiana University researchers earlier this year to break this down for lawmakers.

In one example, the report estimates the state would see a 12 percent reduction in students needing special education services and 18 percent reduction in children needing remediation or repeating a grade. These are two expensive services. They often require one-on-one attention with a teacher. And many special ed students are only in the program because they are behind in skills.

Rep. Bob Behning, R-Indianapolis, is the head of the House Education Committee and will likely carry the pre-k expansion bill. He says the task at hand this session is not convincing legislators pre-k is important, its convincing them to give dollars to the cause.

The Hurdles In The Legislature

Behning says he agrees with groups like UWCI and will propose lawmakers expand the program. He says many legislative leaders are already on board with that plan. One option is expanding the current footprint from five counties to the 18 that were first considered.

When On My Way Pre-K was first being implemented, FSSA strategically chose the current five counties because they wanted a mix of urban and rural areas, places where there was demand for these scholarships and also communities that already had open seats. The five chosen were whittled down from 18 counties – Allen, Bartholomew, Delaware, Elkhart, Grant, Howard, Jackson, Kosciusko, Lake, Lawrence, Madison, Marion, Noble, St. Joseph, Tippecanoe, Vanderburgh, Vigo and Wayne.

Behning says a logical way to do the expansion would be offering the program in these counties, because the FSSA has already vetted them.

But the biggest debate for expansion advocates: how much money should lawmakers put into the program? Since it is a budget session, the main task for the legislature is creating the state’s budget for the next two years. And there will be many other requests legislators will look at when it comes to allocating money, so Behning says convincing his colleagues there are long term savings will be an important strategy.

“I think those are definitely impacts that if you’re not listening to them you’re not paying attention,” Behning says.

He also says another hurdle is speed. Many will want to take it slower, spend a few more years with the current program so they can study its impact.

But for advocates outside of the legislature, like UWCI President and CEO Ann Murtlow, say it’s important to take action this year, even if they only add a few thousand more scholarships for kids around the state.