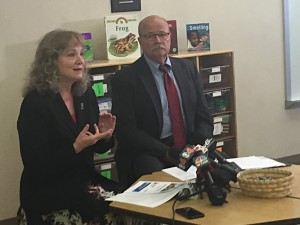 INDIANAPOLIS — Democratic gubernatorial candidate John Gregg and state superintendent Glenda Ritz detailed their proposal for universal pre-K Thursday. Universal pre-k would be free for all 4 year-olds, not just those from low income families.

Ritz will run for re-election in November, and the two Democratic candidates proposed the plan last week.

The state’s current pre-K pilot program, On My Way Pre-K, gives pre-K scholarships to certain families who have incomes up to 127 percent of the federal poverty level — about $31,000 for a family of four.

Ritz said she wants the program to be available for all students.

On My Way Pre-K requires families to apply, and approval takes time. Some have identified this process as a barrier. Ritz said more students will enroll in pre-K if it’s universal.

The plan she and Gregg support would cost the state an estimated $150 million a year. The money would be allocated to 289 public schools with preschool programs.

Ritz said the Department of Education will propose this program to the legislature during the 2017 General Assembly, which is a budget year.

Gregg said this program is good education policy and hopes Republicans in the legislature recognize that.

“My fear is if you just make it income weighted, they think this is just another one of these government programs, that they would call welfare programs, and it’s not, it’s education,” Gregg said.

The program would not require families to enroll their child in preschool.

In terms of funding, both Ritz and Gregg said the state has money for the program. Their plan would pool dollars from state and federal funds, and could use money currently spent on assessment, if the ISTEP+ panel chooses a cheaper option.

Governor Pence signed the state’s current On My Way Pre-K pilot program into law in 2013. The pilot program does not have a long term funding, as its effects are currently being studied. The program launched last year in five counties.