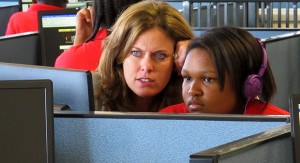 A teacher at Carpe Diem charter school in Indianapolis helps a student complete a lesson on the computer.

Monday and Tuesday, in a word?

Let’s compare this to paper-and-pencil testing for a moment. Students were booted out of the test, at times in the middle of reading a passage, and not allowed to log back in. Officials are saying testing will resume as normal on Tuesday and Wednesday. How do you expect a child, who is already feeling immense anxiety over the test, to have valid results?

In essence, this would be like a teacher taking a testing booklet from students at random during testing, and then having them continue the next day. With no warning, with no explanation.

This is a travesty.

[Test provider CTB/]McGraw Hill, on the other hand, has sanctions worked into the contract, but officials have not levied penalties at all in any of the three failures of service.

But Tony Bennett said Tuesday he felt CTB was responsive to issues that arose in 2010 and 2011.

WIBC’s Ray Steele called Bennett, who was state superintendent during the beginning of Indiana’s contract with the test provider. Bennett told Steele:

We had minimal interruptions in 2012, in large part due to a collaboration between the department, our staff, and CTB/McGraw Hill…

We had some issues in 2010, we had significant issues in 2011. Like I said, CTB was very prompt in their response, very appropriate in their response. We made sure that we had appropriate load tests and the type of information that we needed so that when we went to administration in 2012, we did really experience minimal interruptions. I don’t want to give you the impression we had absolutely no interruptions, but they were minimal interruptions, they didn’t cause any kind of large distraction… We did have to take a very strong look at the impact that the interruptions had on students scores and the validation of students’ scores in 2011.

Listen to the full interview on WIBC’s site, including Bennett describing his belief in having a backup plan — “a paper and pencil option.”

And then there’s this from the Lafayette Journal & Courier editorial pages:

Since testing went online in 2011, ISTEP time has been marred by instances of computer downtime. That’s not going to cut it.

Indiana has a four-year, $95 million with CTB/McGraw Hill to administer the tests through 2014. The contract includes a clause that requires the company to provide uninterrupted computer availability every school day during the testing window, plus the two weeks leading up to it.

In a school reform climate that puts a premium on accountability and measurable results, the state’s testing methods aren’t stacking up.

This has to be fixed.

My daughter’s agenda book today! One thing that made me chuckle after this day! #evscnetwork #istep #INeLearn twitter.com/klaviermann76/…

How did you experience the ISTEP+ glitches Monday and/or Tuesday? Were you in the testing rooms? Did your kids recount the experience? Drop us a line (or a Tweet) or leave a comment below.