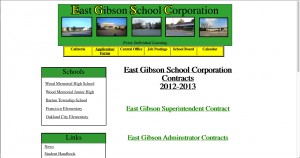 More than a quarter of Indiana school districts aren’t in compliance with a 2012 law that requires they post their superintendent contracts online, reports Thomas B. Langhorne for the Evansville Courier & Press:

It’s hard to say exactly how many for sure because a Courier & Press analysis turned up some contracts in the strangest places.

In one case, the superintendent’s contract was only located through a Google search. It is on the school district’s site, but it wasn’t possible to access from the site. In another case, the information was found under a tab called, “employment opportunities.”

In some cases, superintendent contracts are not posted at all… In all, the Courier & Press found 106 Indiana school superintendents haven’t posted their contracts or they have posted them in a way that requires help to find.

Thirteen months after then-Gov. Mitch Daniels signed the public disclosure statute and almost 10 months after it became law in Indiana, compliance by the state’s highest-ranking educators is sketchy. Enforcement is impossible, the statute’s author says, because legislators felt the two most appropriate state agencies are too political to be entrusted with it.

Langhorne reports that some school districts interpreted the law, which went into effect July 1, 2012, as giving them a year to post the contracts online. Other superintendents said they weren’t aware the contracts weren’t available.