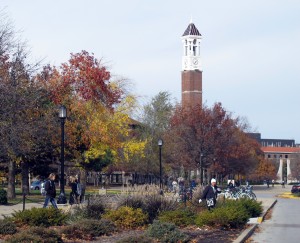 Purdue University will freeze in-state tuition through the 2014-15 school year.

The news came just a day after President Mitch Daniels announced that merit pay raises would be eliminated through 2015 for all senior administrators, deans, and administrative and professional staff making more than $50,000 per year. It’s expected to net Purdue $5 million over the next two years.

The pay freeze will help Purdue cover the estimated $40 million no longer coming in from tuition.

But Sigurdson said the decision to refocus Purdue’s Washington, D.C., strategy was not motivated by the tuition freeze. Future initiatives to offset the lost revenue still are in the works and should be “significant.”

As governor, Daniels pushed the state’s public colleges and universities to live within their means, tying funding to degree completion. He says he’s concerned about keeping college affordable for Hoosiers.

“We spend $2 billion dollars a year around here, and $1 billion is what is thought of as the general fund budget. So this is what, a couple of percent maybe?” Daniels told WBAA‘s Mike Loizzo. “I’m pretty sure we can do this if we set our minds to it.”