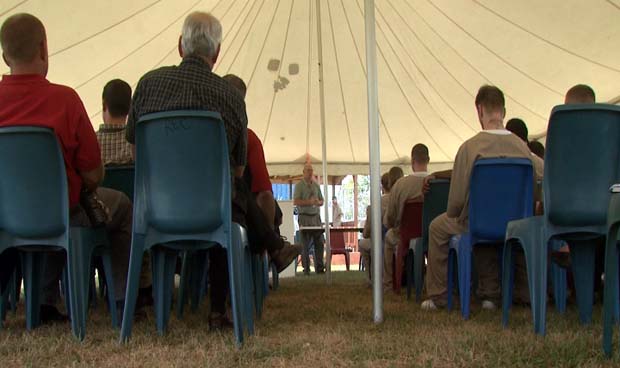 Department of Corrections officials say it costs about $7,000 to run a program like this one for 15 people. Before the college degree programs ended, the state spent $7 to 10 million to educate 2,400 students. The state paid this funding directly to the DOC’s partner colleges.

He’s wearing his beige prison uniform, not a graduation robe. He’ll have to hand over his diploma to the prison secretary before he leaves the graduation ceremony, and at the end of the day, he’ll still be in prison, where he’s doing a year for dealing meth. But in spite of that, Coomer is excited about what his new certificate will allow him to do once he gets out.

“I’m going to be certified to where I can actually go to work at a coal mine,” says Coomer.

Indiana’s prison administrators are redesigning their educational programs for prisoners. After the state cut funding for college degree programs for inmates, prison officials are now focusing on training inmates for jobs in specific industries.

Coomer is one of 30 inmates in the first graduating class of a program that teaches inmates mining technology. The inmates attended weekly classes to earn a license that could, in theory, help them get jobs in mines when they get out. When Coomer is released later this summer, he’ll head back to his home in Gibson County and try to get a job in one of the nearby mines.

How Prison Education Is Changing In Indiana

“We had three separate mines just right surrounding my town,” says Coomer. “I mean, you can stand in the middle of town, point any direction, and you’re going to point at one.”

Perhaps the only person more eager than Coomer about him getting a job is John Nally, the DOC’s director of education.

Nally explains former prisoners who get jobs are less likely to end up back in prison. The thinking is when it costs $52.60 per day to keep an adult incarcerated in Indiana, the savings of making sure people don’t come back add up.

Nally says that’s why the Department of Corrections is promoting programs that match prisoners with specific job paths.

“They give you a certificate that you have to have to get employment in various industries. So it’s just like coal mining, HVAC — heating, ventiliation and air conditioning — landscaping, welding, culinary arts,” says Nally.

But the shift towards vocational education in Indiana’s prisons hasn’t been welcomed by everyone.

Glenna Simons used to teach sociology, political science and even criminal justice to men and women in prisons around the state. But her job got cut when college degree programs were eliminated earlier this year. 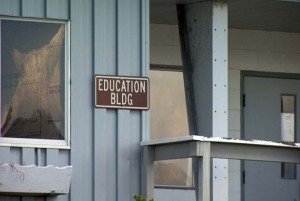 Prisoners in the program have to be from a coal mining county originally, can’t have certain violent or drug-related convictions and must be on the path to getting out of prison. DOC officials say prisoners must also be 35 or younger to fit coal mining industry requirements.

Simons says she’s disappointed the college degree programs are gone — not so much because vocational education is a bad thing, but because, she says it’s not really her definition of education.

“Engaging in debate, discussion, thinking of new ways of doing things. Again, once that process is started in a student it is, it can be, transformative,” says Simons. “It changes a person, and in my way of thinking, that’s what education is.”

Simon says people tend to forget that the vast majority of people in prison today aren’t serving life sentences — they’re going to be released someday, and they’ll need to assimilate back into society when they get out.

“I would think it would be a very good investment for folks to not only have specific skills for jobs, but for them also to learn about things like ethics and empathy and leadership and adaptability,” she says.

But many prison administrators say there are other ways to transform people. Branchville Superintendent Gil Peters says faith-based programs and substance abuse classes help with that, and they don’t cost nearly as much as partnering with colleges on academic programs.

“I think that we can do good corrections without the college education and some really expensive type programs,” says Peters. “If you look at our population, they’re not gonna be rocket scientists and things like that.”

“Substance abuse is fine, but this is actually going to give me something I can use out on the street. And that’s what most of the guys need.”
—DJ Coomer, mining graduate

Peters says if he can help funnel prisoners into jobs when they’re back in society, he’d rather do that.

But there is a question of whether graduates of the coal mining program are actually going to get jobs. Former prisoners have the added task of explaining a felony conviction to future employers.

Educators say prisoners have a much better chance at getting a job if they know someone who can help them find one. That’s what graduate DJ Coomer hopes his mining technology teacher will do.

Coomer says of all of the programs meant to help him succeed once he’s back in society, he thinks this one will end up helping him most.

“Being able to get out and possibly obtaining a job that’s going to start you out just starting pay $12, 13 an hour, I mean, that’s, you know, that should be right there the benefit enough to keeping a person from using or ever going back to that type of lifestyle,” he says.