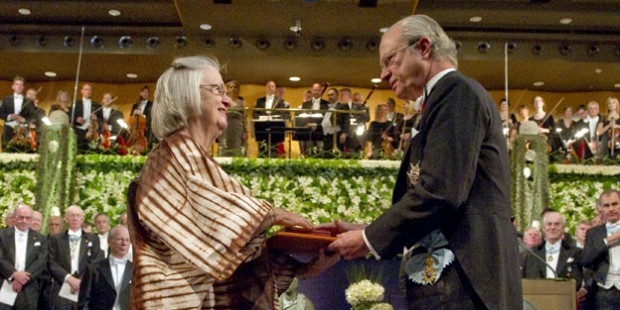 Elinor Ostrom receives the Nobel Prize in Economics from King Carl XVI Gustaf of Sweden during the awards ceremony in Stockholm in December 2009.

The “tragedy of the commons” — the theory that a shared resource will be inevitably overused without government intervention, as Planet Money puts it — was widely-held as a fundamental paradox of modern economics and ecology.

Elinor Ostrom changed all that.

Ostrom, 78, died of pancreatic cancer Tuesday at a Bloomington hospital after five decades on the Indiana University faculty.

Colleagues remember her for her humility and generosity. But the world will remember Ostrom for the achievement that won her the 2009 Nobel Prize in Economics — to date, she’s the only woman to receive that honor — as Planet Money writes:

She was famous for challenging an idea known as the tragedy of the commons — the theory that, in the absence of government intervention, people will inevitably overuse a shared resource.

So, for example, if a village shares a pasture, it’s in the individual interest of each farmer to graze his cattle as much as possible on the pasture even though, in the long run, overgrazing may ruin the pasture for everyone.

“It’s a problem, it’s just not necessarily a tragedy,” Ostrom told us when we spoke to her in 2009. “The problem is that people can overuse [a shared resource], it can be destroyed, and it is a big challenge to figure out how to avoid that.”

But, she said, economists were “wrong to indicate that people were helplessly trapped and the only way out was some external government coming in or dividing it up into chunks and everyone owning their own.”

To mount her challenge to the tragedy of the commons, “Lin” — as she was known — crossed over boundaries separating academic disciplines. Though a political scientist by training, Ostrom’s is remembered for contributions to economics, anthropology and even fisheries management.

“People talk about collaborative research, the National Science Foundation tries to encourage it. She’s been doing it for 30 years. So in many years, she’s so far ahead of everybody else in terms of thinking that way,” Fischer says.

Indiana University announced Tuesday the research workshop Ostrom and her husband founded in 1973 has been renamed in their honor.