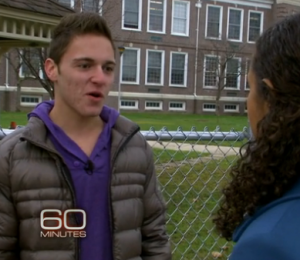 Sam Eshaghoff, a 19-year-old Emory University student who graduated from a New York high school, speaks to a CBS' 60 Minutes reporter about the ease with which he accepted payment from other high school students to take the SAT exam on their behalf.

His prosecutor called him an “academic gun-for-hire.” He took payments from other high school students, then took their college entrance exams for them.

Eshaghoff was the first of 20 students authorities — among them, a current Indiana University student — arrested in November on similar charges. He recently accepted a plea deal.

In an interview with 60 Minutes this week, Eshaghoff not only bolstered the district attorney’s allegations of widespread cheating on the tests, but raised questions about the ease with which test-takers can fake their way into an ACT or SAT exam room nearly anywhere they wish.

Eshaghoff’s television performance didn’t exactly win points for contrition with some viewers, but he did explain the nature of his scam in detail.

Since school ID cards are one form of acceptable identification students can present on examination day, Eshaghoff told CBS that — for a price that sometimes climbed above $2,500 — he could simply create fake IDs with his picture and the name and birthdate of his “client.”

From his interview (you can watch it here):

When I go to take the SAT, it’s as easy as going in, keeping your head down, giving the proctor a flash of the ID. They just need to match the name on the ID with the name on their roster… I realized that the proctors were just junior faculty members, cafeteria aides and staff that had no business proctoring a test.

He also realized he was good at it. Eshaghoff regularly scored in the 97th percentile on exams he took, CBS reports.

It’s a troubling accusation for Educational Testing Service, which — according to Education Portal — spends $25 million to ensure security on the SAT exams they create and administer.

The allegations have even touched Indiana, with one of the alleged paid test-takers enrolled as a student at IU.

Prosecutors arrested IU sophomore Adam Justin in November on charges he accepted payment for taking the SAT and ACT on behalf of nine other students. Justin attended a different high school from Eshaghoff, but posted similarly high scores, scoring better than 89.2 percent of students who took the SAT.

Eshaghoff expressed remorse for his actions in the interview, telling CBS he “never would’ve done it” if he could start over. But he also says he felt he was helping students:

Eshaghoff: My whole clientele was based on word of mouth, and a referral system. As soon as I saved one kids’ life—

Eshaghoff: Saving his life… I mean a kid who has a horrible grade point average, no matter how much he studies is going to totally bomb this test, by giving him an amazing score, I give him a new lease on life, he’s gonna go to a totally new college, he’s gonna be bound for a totally new career and a totally new path in life.

If you’re not a hard-working, “academically conditioned” student, you can’t study your way to significantly higher scores in six months, he believes. Yet he seems to think that the kid with horrible grades who buys his way into a better college will succeed there and go on to “a totally new career” and life path.

The interview also caught the attention of business ethicist Steven Mintz, who blogs:

Some blame parents for putting too much pressure on their kids to get into the best schools. Others blame peer groups and the pressure, especially in a wealthy community with high achieving parents… to get into Ivy League Schools. I blame Eshaghoff and the kids who hired him to cheat. They need to accept personal responsibility for their actions. How will they learn that there are consequences for violating the rules, breaking the law, and acting immorally if they are not punished?

What do you think of Eshaghoff’s tell-all interview? And should the SAT make more rules to deal with potential, future scammers like Eshaghoff?