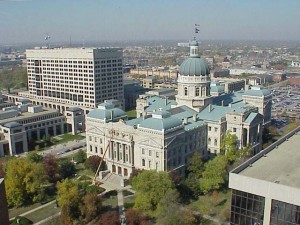 Last year was a hard hitting year in Indiana education policy and while right to work has dominated headlines, this year’s lineup of bills promises at least a few fireworks.  StateImpact scoured through legislation waiting to be discussed on the floor of the General Assembly.  We bring you three education related Senate bills guaranteed to spark debate or at least a little discussion.

This has been a big water cooler story for StateImpact over the last few months. Earlier this year, the Indiana Department of Education eliminated cursive handwriting as a mandatory course requirement for schools. This move came in response to an effort to bring Indiana curriculums into line with federal Common Core standards.

The backlash was instantaneous and wide. StateImpact’s profile of the issue was one of the most commented stories of the year. It seemed like everyone had an opinion on the potential loss of calligraphy’s less glamourous cousin.

Senate Bill 0083 seeks to restore cursive as a mandatory part of Indiana education. This is one of the few education bills being considered in the current session which enjoys wide support from both Democrats like Tim Skinner of Terre Haute…

Cursive is just as important as mathematics and science.

Leising says she is appalled that students may no longer learn the writing style that has connected generations of Americans.

There is currently no organized resistance to the idea of reviving cursive in Indiana schools.

All public employee unions in Indiana are already right to work. This is because of an executive order issued by governor Daniels in 2010. SB 0159 would make that decree a law. This would make it more difficult for other governors to get rid of right to work restrictions in the future.

This is one of a slew of more aggressive right to work bills being considered during the current session. Speaker of the House Brian Bosma told the New York Times that this issue is at the top of the list for Indiana’s Republican caucus.

This (right to work) is stopping employers from coming to Indiana. We need to deal with that.

Similar legislation proposed during the last session was cited as one of the key causes of a Democratic walk out. There are early rumblings from union officials with the AFL-CIO that major protest against this year’s version of the legislation are likely, if not all but guaranteed. Much of the union’s anger is directed at Governor Daniels, who has decided to back the controversial measures.

“While everyone knew this announcement was coming, it’s still disappointing that on his way out the door, Governor Daniels would choose political paybacks over economic progress for the citizens of this state,” said Indiana AFL-CIO president nancy Guyott in a prepared statement to the media.

Democratic leadership in the House has raised the spectre of another walkout this year.

The Indiana Department of Education has been pushing for a measure which would require students to participate in at least one online course during their K-12 career. Big name influencers have been pushing for the measure. Former Florida governor Jeb Bush cofounded a group called Digital Learning Now, which advocates mandatory e-learning. The group promotes a nine-part legislative plan which starts with increasing the availability of Internet access and ends with creating funding for online learning programs.

There are those who are critical of the idea. Michael Horn wrote a piece for Forbes questioning the wisdom of enshrining any specific teaching method into statute.

I’ve never been bullish on mandates. As a general rule, they tend to distort markets and sectors, have unintended consequences down the line at best and immediately at worst and lock in ways of doing things at the expense of innovation.

Horn goes on to argue that online learning should be viewed as a means to achieving academic success, not as an end in itself.

… students may learn better offline, and a system powered by digital learning should be able to accommodate that. The purpose should never be technology for technology’s sake.

Senator Dennis Kruse (R- Indianapolis) coauthored the bill. He is one of the toughest educational power player’s in the Indiana legislature. His name was attached to several of the most controversial pieces of legislation debated during last session. Most of those bills are now law.

Indiana’s teachers unions were statutorily changed to right to work status in 2005 under Public Law 1-2005. The legislative title of SB0159, the bill mentioned in this article, was listed as “Teacher Right To Work” until it was altered sometime yesterday afternoon to “Teacher Union Dues”. SB0159 would prevent schools from deducting union dues from a teacher’s salary.