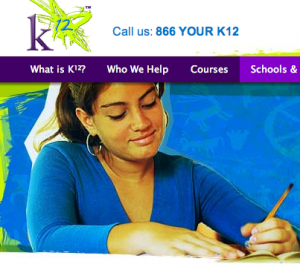 Stock in a corporation behind three Indiana charter schools sunk by 20 percent after a front page story in Tuesday’s New York Times raised a tough question:

Are K12 Inc. and other online charter school companies like it making hundreds of millions in revenues while offering sub-par education to students?

According to the Times report, two out of three K12 schools nationwide failed to meet yearly progress goals set by the No Child Left Behind act. In Indiana, state education officials gave F’s to two of the three charter schools in K12’s portfolio, known as Hoosier Academies. The third school received a D.

The largest of the three Hoosier Academies offerings, Hoosier Academies Virtual School offers a fully-online charter school curriculum to as many as 2,265 students statewide. That program received an F from the Indiana Department of Education. 58 percent of students in the program passed required standardized tests — 12 percentage points below the statewide average.

K12 also runs two charter schools which offers students a blend of online instruction and time in brick-and-mortar schools in Indianapolis and Muncie.

From the Times story:

While the notion of an online school evokes cutting-edge methods, much of the work is completed the old-fashioned way, with a pencil and paper while seated at a desk…

The New York Times has spent several months examining this idea, focusing on K12 Inc. A look at the company’s operations, based on interviews and a review of school finances and performance records, raises serious questions about whether K12 schools — and full-time online schools in general — benefit children or taxpayers, particularly as state education budgets are being slashed.

Instead, a portrait emerges of a company that tries to squeeze profits from public school dollars by raising enrollment, increasing teacher workload and lowering standards.

But Tom Vander Ark, director of the International Association for K-12 Online Learning, fired back on Getting Smart, accusing the Times of sensationalizing:

The New York Times ran a long story attacking K12, Inc. and online learning today. It is part of a series of hit pieces targeting private companies supporting innovations in learning that salaciously lift worst-case examples and present them as representative. Maybe this is what tabloids do, but we used to expect more of the Times…

The sensational barrage is against K12, the online learning provider, but it really isn’t about the company. It’s the shift from print to digital, the shift from place to service, and the emergence of the private sector as an important partner in the delivery of public education. The rise of online and blended learning is the most interesting and important story of 2011 — one that deserves investigative reporting. But instead the Times skipped the context and attacked a small segment — full time online learning — and attributed public policy problems to a private provider.

What do you think? Where would you place the performance of the Indiana charter schools K12 operates, judging from their test scores and state letter grades? Do you feel, as Vander Ark suggests, that the Times has an ax to grind? Or does the Times shed light on real flaws in online education?

(A big h/t to Steve Hinnefeld, who blogs at School Matters, for turning us on to this.)