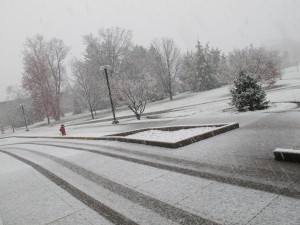 As parts of Indiana brace for the first slushy snowfall of the season, consider a 2009 study that found passage rates on standardized math tests fell by as much as half of a percentage point for each inch of snow.

The study’s authors looked at snowfall and testing data in Colorado and Maryland, saying their goal was to quantify how much one day’s-worth of time in class affected students’ exam scores.

Their findings? For every day students missed school, overall passage rates fell by “about one-third to one-half a percentage point.”

Each additional inch of snow in a winter [in Colorado and Maryland] reduced the percentage of 3rd, 5th, and 8th grade students who passed math assessments by between one-half and seven-tenths of a percentage point, or just under 0.0025 standard deviations. To put that seemingly small impact in context… winters with average levels of snowfall (about 17 inches) the share of students testing proficient is about 1 to 2 percentage points lower than in winters with little to no snow…

[In Maryland,] the percentage of students passing math assessments fell by about one-third to one-half a percentage point for each day school was closed, with the effect largest for students in lower grades.

Why Colorado and Maryland, by the way? The authors write these two states see high variations in their levels of overall snowfall.

Before you knock down your snowman and hit the books, remember the study only considers math scores. Marcotte and Hansen themselves point out another study which finds more days in school can actually have a downward effect on students’ reading scores.