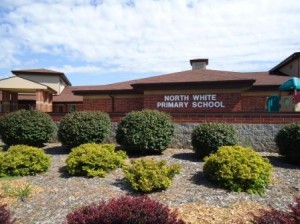 North White Primary School has received an A for the last two years. The year before that, the school received a D.

But what if instead, all grades were based on a single test?  For Indiana’s schools, this is how things are.

It’s a predicament which causes superintendent Nick Eccles of the tiny North White School Corporation in Monon, Indiana, to shake his head and laughed.

“When you look at our test scores collectively compared to our counterparts,” says Eccles. “We’re still behind them.  But they’re getting Cs and Ds and we’re getting an A.  I mean I love it.  Don’t get me wrong. I’m not gonna say I don’t like it.”

The school letter grades only take into account two factors;  How well students score on standardized tests and how much students improve over time.  While Eccles admits test scores at his district aren’t the greatest, they’ve been improving.

But his district is so small that he serves double duty as superintendent and principal at the elementary school. He says that lets him dig into helping individual classrooms, but also makes him worry about his school’s individual letter grade.

Leslie Rutkowski studies assessments at Indiana University’s School of Education.  She says the

fewer students a school has, the less accurate an assessment is.

“Any statistic is subject to the vagaries of small sample size and as you said, a few outliers can drag down an average,” says Rutkowski.

Rutkowski says it’s not uncommon to see a single school jump up or down by three letter grades in a single year.  Among the smaller schools in the state, there were even a few instances where a school saw its letter grade do a 180 — going from an A to an F or, worse, the other way around.

This actually happened to North White School Corporation, where Buffalo Elementary jumped from a D to an A in a single year.  But the grades aren’t simply a matter of bragging rights for schools.

Wes Bruce is Chief Assessment Officer for the Indiana Department of Education.  He says the state decided to use the letter grade idea after earlier systems failed to catch the public’s attention.

“The state had a system of five categories before,” says Bruce. “Those categories, when we talked to folks in the field, were not very meaningful.”

So the state changed the system to use letter grades and began giving failing schools grades easily associated with not meeting expectations.  This caught people’s attention, Bruce says, because teachers and parents alike didn’t want their school getting an F.

“Several years ago, when Florida started grading schools, there were a significant number of schools getting Fs,” says Bruce. “They’ve kept the same system…  Well actually, they’ve made the bar higher.  There are many fewer schools receiving Fs today in Florida than were receiving them before.”

But North White Superintendent Nick Eccles says it’s not just a matter of looking good compared to other schools – it’s started a push to be Google friendly.  Now, even a cursory Internet search will turn up a school’s letter grade.  And both potential business investors and parents thinking about relocating recognize the difference between an A and an F.