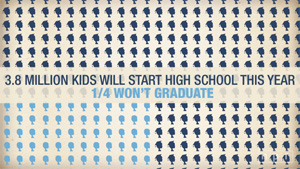 Click on the image to view the homepage for NPR's weeklong series, including an animated video taking an in depth look at dropping out by the numbers.

The nearly 1 million U.S. students who dropped out of school in 2010, including 4,100 in Indiana, face higher unemployment rates and higher risk of substance abuse and suicide, NPR is reporting in a special series this week.

While Indiana’s dropout rate has dropped since 2006, NPR says the national numbers are much more stark.

NPR isn’t the first to apply the term “crisis” to the nation’s dropout rate. In 2009, the New York Times editorial board said the “dropout crisis… is trapping millions of young Americans at the very margins of the economy.” But today, the numbers NPR is reporting are just as staggering:

Data from Indiana’s Department of Education show a much more muted problem in Indiana. The state’s dropout rate fell 4 percent between 2006 to 2010, with 4,200 fewer Indiana students leaving school before graduation.