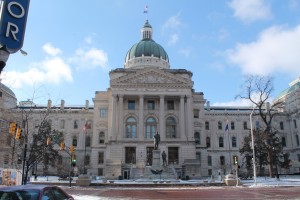 A House committee heard testimony on a bill Wednesday that would help the state identify schools facing financial problems, but the bill has already been met with criticism. Both Gary and Muncie Schools were taken over by the state last year after their finances reached crisis levels.

Some key pieces of House Ways and Means Committee Chair Tim Brown (R-Crawfordsville)’s legislation have superintendents and teachers concerned. In addition to creating ways for the state to check in on and offer help to schools flagged for financial problems, it would also provide ways for the District Unit Appeals Board (DUAB) to strip some school officials of their power.

The legislation targets Gary and Muncie Community Schools as examples for what other financially distressed schools could see if they face major financial trouble. A core part of the legislation would reduce the number of meetings for the school board of a struggling corporation from once a month to once every six months, and limit the power of the board.

It would also allow financially distressed schools to fire up to 5 percent of their teachers mid-year to address budget concerns.

Sally Sloane from the American Federation of Teachers says that would only do more harm to struggling schools.

“Adding uncertainty about even one school year of employment is going to keep new teachers away and could drive the remaining good ones out,” Sloane says.

The legislation would also allow the DUAB to suspend or revoke a superintendent’s license if their school corporation was flagged for a financial watch list four years in a row. Something Public School Superintendent’s Association Director J.T. Coopman, says is unacceptable, especially because budgets are only one piece of a superintendent’s job.

“Sometimes they inherit circumstances that are not of their making,” he says.

An amendment was also added to the bill which would give Ball State University managerial control over Muncie Community Schools.

Muncie Community Schools was put under full state control on Jan. 1. But this amendment means the university could assume responsibility for the district.

The university’s President Geoffrey Mearns testified that he supported the amendment, and would seek that control if passed.

Sen. Eddie Melton (D-Gary) also filed a school finance bill, but it has not been heard by a committee yet. His legislation would also create ways for the state to evaluate a school corporation’s financial wellbeing. But he says he hopes for any final measures around school finances to provide help to schools instead of punishment.