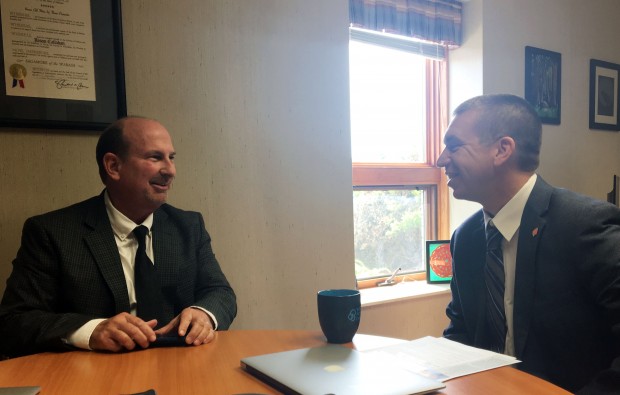 There are two school districts in Wabash, Indiana, not enough students to fill both, and both are struggling financially.

Jason Callahan is superintendent of one of these districts, Wabash City Schools, and he’s made a lot of changes to save money.

“At some point you can’t cut any more,” Callahan says. “We’re down to one elementary, one middle school one high school, in our whole district, so there’s no more buildings to reorganize.”

With those school consolidations in Wabash City Schools, the only remaining elementary school is is at maximum capacity.

Principal Danielle Miller shows me the classroom for the gifted students. Before the consolidation, this was a storage room.

“So we have literally utilized every space,” Miller says. “It’s a tight fit in here.”

Scenarios like this exist across the state. Over the last decade, almost all rural school districts lost students. And because state funding is based on enrollment, when students leave, so does cash.

On top of this, consolidation and school closures upset parents, who may elect to move their children, which means even less money.

Callahan says his district gained 100 kids from the neighboring Wabash county district last year, taking more than half a million dollars from his neighbor.

“That’s the other challenge that we face,” Callahan says. “As we try to break down silos and work together, we also, at the same time, see each other as competitors, and how much do you want to work with someone you’re competing with for students and ultimately revenue.”

And despite the loss of revenue when his students transferred to Callahan’s district, MSD Wabash Superintendent Mike Keaffaber says he is committed to working with Callahan.

Keaffaber says both communities need to work together to provide good educations for all kids.

“So I guess the fear would be, the challenge would be, is if people aren’t understanding of that,” Keaffaber says. “And I think that’s really the big thing right now we have to look toward.”

Getting Community Buy In For Big Changes

Both superintendents say it is hard to effectively convey their financial challenges to the public.

Callahan closed an elementary school three years ago on the South side of Wabash after enrollment declined. He says it was too difficult to pay the bills. So they closed it. He tells me it was hard for local families to accept.

“Some people did recognize we were being good stewards of the dollar, and enrollment’s driving this,” Callahan says. “But other people saw it as a break from tradition.”

Both superintendents expect even more community pushback in the coming years. As populations continue to decrease, the two are now considering district consolidation – becoming one, larger school system. But before they make any big decisions, they commissioned a study from their community foundation. It will look at population projections in Wabash and the financial future for families that live there.

Keaffaber wants this data to help answer an important question.

“So if we’re going to continue losing enrollment, how can we make education for our students the best that they can have?” he says.

The results of this study will dictate how these two districts move forward, and Keaffaber hopes hard numbers will also make it easier to explain their conclusions to the community.

The superintendents say the report should be done by the end of summer.