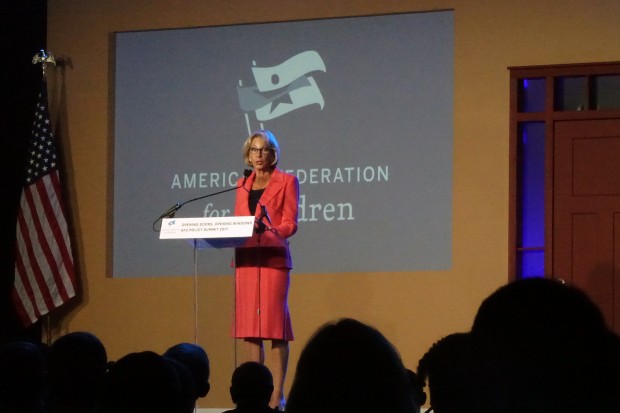 DeVos gave the keynote address at the annual conference for the American Federation for Children, a school choice advocacy group.

She praised Indiana’s school choice laws which includes a voucher program that gives more than 30,000 students state money to attend private schools. DeVos says she wants students all over the country to have the same opportunities as students in Indiana, and that the Trump administration has a plan to do that.

“The President is proposing the most ambitious expansion of education choice in our nation’s history,” DeVos said. “The proposal’s aim is to empower states and give leaders like Gov. Eric Holcomb the flexibility and opportunity to enhance the choices Indiana provides for Indiana students. If a state doesn’t want to participate, that would be a terrible mistake on their part. They will be hurting the children and families who can least afford it.”

She did not lay out details to what a federal program could look like, but budget blueprints leaked over the last few months show various cuts to public education.

The Indiana State Teacher’s Association organized a protest of DeVos’ visit, and held a rally with speaker’s discussing the downfalls of widespread school choice.

Maranda Yaggi was one of the protestors, and works in public education. She says this program hurts public school systems.

“I worry that the cuts she proposes won’t make us stronger but in fact devastate our public education system and she’s doing it in the favor of special interests,” Yaggi says.

Indiana has some of the most expansive school choice laws, including laws that encourage charter schools and the voucher program.