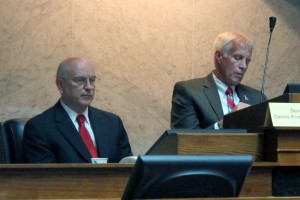 After one of the last meetings of the ISTEP+ panel, it seems unlikely the group of educators and policy makers will draft a plan for a new state assessment.

When the 2016 General Assembly created the panel through legislation, it charged the group with creating a recommendation for a new test by Dec. 1. The vision was to have educators and other stakeholders craft a plan with elected officials that would then be written into law.

Through the panel, the legislature appointed teachers into the conversation about the future of testing, something many educators have desired for a long time.

Tuesday’s meeting was the fifth of the seven meetings before the Dec. 1 deadline. The previous four focused on ‘creating a test.’ Panel members heard from national experts and engaged in general discussions about what they want to see.

Now, as the deadline looms, with only two planning meetings left, some of the panel members are disappointed there won’t be time to have as much influence over the new test as they originally thought.

“Perhaps what that means is we become more general in our recommendation to the state,” says superintendent of Blackford Schools and panel member Scot Croner. “We won’t be able to be as specific as some individuals, including myself, would have liked to have been in the proposal.”

Representative Bob Behning, R-Indianapolis, authored the bill that eliminated the current ISTEP and created the panel. He says the lack of forward mobility comes from the fact that most of the panel don’t usually work in creating an assessment from scratch. He made this statement after the Tuesday meeting, where panel members asked questions about tests at different grade levels and how they work.

“There’s a lot of people who, even on this panel, that are assessment illiterate,” Behning says.

When asked if he would take the panel’s final recommendation seriously or build a plan with other legislators?

So far, the group has not voted on or put forward any concrete set of parameters for the new test.

At Tuesday’s meeting, the Department of Education announced to the panel that they independently contacted testing vendors (companies like Pearson, CTB, ACT, etc.) to ask for proposals on a new test.

This is known as a Request for Information (RFI), and it’s a document of questions sent to companies, asking how they would create a test meeting Indiana’s requirements. The DOE created this document in conjunction with the governor’s office, to bring something concrete back to the panel.

State superintendent Glenda Ritz says this move will ensure the panel has a solid recommendation before December, since the panel wasn’t sure what kind of things to ask of the legislature.

“We need more information?” Ritz says. “Fine, that’s what the whole purpose of the RFI is – what’s out there that we actually can do.”

The proposals from testing companies are due Sept. 30 and will be presented to the panel at the October meeting, with company names redacted.

With only two meetings left, the panel has yet to discuss a state assessment for grades three through eight.

This year’s students and teachers are currently using the ISTEP+, but that will not be the case in spring 2018, according to law. The current version of the ISTEP+ was voted out by a bipartisan group of lawmakers last session.

Behning previously said the state might elect to prolong this test and the contract with testing company Pearson.