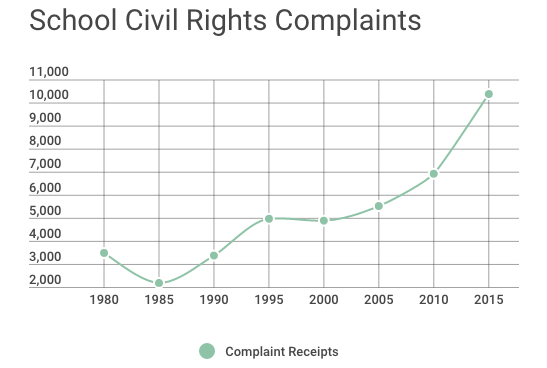 School-related civil rights complaints are at a a record high in 2015. (Source: Department of Education)

School-related civil rights complaints leapt to a record high in 2015, with 10,392 grievances filed with the U.S. Education Department.

Nearly half of the complaints were filed on behalf of students with disabilities and about one in five grievances alleged discrimination based on race, color or national origin, according to findings released Wednesday by the U.S. Department of Education’s Office of Civil Rights.

“OCR’s work over the last year has been absolutely pivotal to advancing the Department’s goal to increase equity and opportunity for all students,” John King, U.S. Secretary of Education, said in a statement. “We are committed to working with and supporting schools to protect students’ civil rights — and we will take action to secure those rights when necessary.”

The department says they opened more than 3,000 investigations to protect students’ civil rights in 2015.

Create your own infographics

The report also highlighted trends found in U.S. schools during the 2011-2012 school year.

These numbers provide a national snapshot of school investigations and monitoring work done by the OCR.

The U.S. Department of Education is expected to release state-by-state data from the 2013-14 school year later this year. We’ll take a look at Indiana’s numbers when that happens.