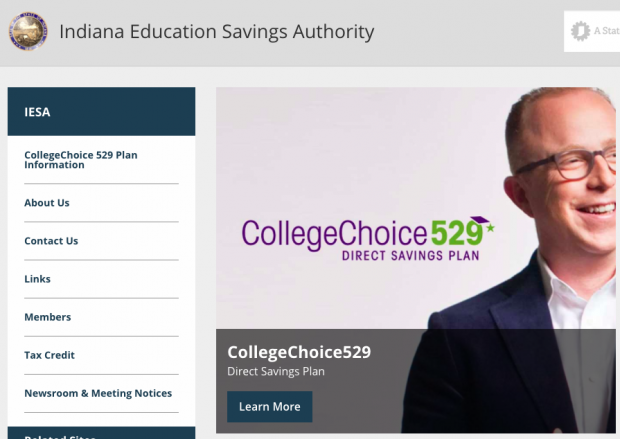 The website of the Indiana Education Savings Authority. (Credit: State of Indiana)

Indiana lawmakers want to study the impact of 529 College Savings Plans on state revenue after a just enacted federal tax change allows the accounts to be spent on tuition at private elementary and high schools.

Legislation in the General Assembly that would have replaced the annual cap on income tax credits for donations to college savings plans with a lifetime limit is being amended to instead shift the issue to a summer study committee.

Rep. Wes Culver, R-Indianapolis, the House Bill 1039 author, says the aim is to let families gift more money upfront to a College Choice 529 Savings Plan and still benefit from the same amount of limited credits. Families who can do this will accrue more interest over time in the account — which means more money to pay a student’s college tuition, room and board, books and other costs.

“I’ve always been concerned with the debt students graduate with from college is harmful,” Culver says, adding that 529 plans are one way to help alleviate that. “This is a twist on that, if we can allow front-end loading.”

While lawmakers in the House Ways and Means Committee last week applauded the idea to help students and families afford college, some urged caution.

Rep. Ed Delaney, D-Indianapolis, says offering more tax credits up front could turn into a negative impact for state revenue – because the 529 account can now be spent on private K-12 schools.

“This would allow a person to make a substantial deposit for their five-year-old. And then get a tax credit from us and then the next day pay tuition at an expensive school,” he says.

Lawmakers agreed and the bill was amended with a recommendation to be sent to the Interim Study Committee on Fiscal Policy. Another approved amendment, calls for the study of expanding the 529 account to cover public K-12 school expenditures.

Indiana has around 341,000 College Choice 529 Savings Plans with $4.3 billion in assets, according to Troy Montigney, who oversees Indiana’s 529 programs. Montigney told the committee he’s heard from many families who want to spend some of their account of private school tuition

Montigney agreed with lawmakers that the ability for the accounts to be used on K-12 private tuition raises many policy issues.

“That could potentially throw another wrench into the mix for your further study in college affordability this summer,” he says.

Culver began working on the bill in June with insight from Purdue University President Mitch Daniels who has made college affordability a primary focus. Culver says the bill was written before President Trump approved the federal tax overhaul.

But, if someone was able to give $110,000 during a child’s first five years and not be penalized through state taxes the account could grow to $333,000 to pay for higher education, Culver says.

Under both scenarios, the person giving the money would benefit from $22,000 in income tax credits.