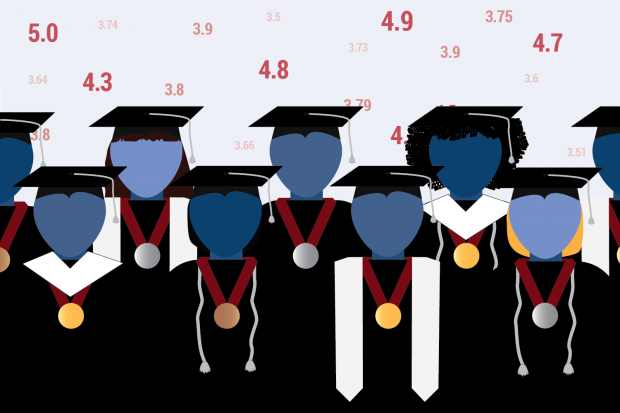 Graduation rates will now be calculated using only Core 40, a state diploma aimed at students who want to go on to four-year colleges or professional fields, and International Baccalaureate diplomas. (Lauren Chapman/Indiana Public Broadcasting)

In a memo to principals and superintendents, the state said it will also no longer count students who earn general diplomas in the state’s A-F rating system.

The change comes as a new federal education law, the Every Student Succeeds Act, requires graduation rates to be to be calculated uniformly across states. In recent years, graduation rates have become increasingly controversial as districts lie about rates or water down graduation requirements.

Graduation rates will now be calculated using only Core 40, a state diploma aimed at students who want to go on to four-year colleges or professional fields, and International Baccalaureate diplomas.

The Indiana General Assembly made completion of Core 40 a graduation requirement for all students beginning in the fall of 2007. The legislation includes an opt-out provision for parents who determine their students could receive a greater benefit from the general diploma.

That’s where special education comes in.

“If somebody really has a hard time testing or isn’t able to test very well, then they won’t pass the end of course testing and then they can’t get a Core 40,” says Dana Renay, chief executive ally of Autism Society of Indiana.” Just because they can’t get through the assessments, doesn’t mean they can’t complete the coursework.”

“There are concerns about the quality of service, what [schools] will and will not provide, or be able to provide,” Renay says. “If you don’t have a diploma you can’t get into college, you can’t get some jobs. It’s a really important thing to have that diploma.”