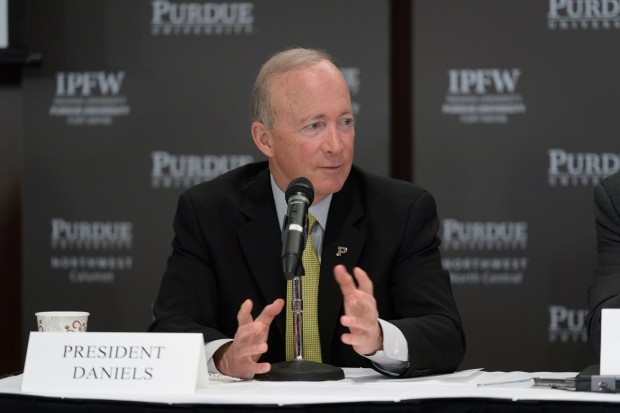 So, there’s been some big news going around the higher education world this past week. In a nutshell: Indiana’s Purdue University will acquire the for-profit Kaplan University, which operates primarily online.

We take a look at the biggest questions surrounding the move:

Purdue University in Lafayette, Indiana, will acquire the for-profit Kaplan University and create a new university that will operate primarily online. Kaplan’s existing 15 learning centers, 32,000 students and 3,000 employees will transition to the yet-unnamed university. The new university will use the Purdue name in some fashion, according to Purdue officials.

The new entity, nicknamed “New U” for now, will be a part of the public Purdue system, which currently operates three campuses. New U, however, will be financially independent of the existing Purdue system. New U will rely only on tuition and fundraising, not state funds, for operating expenses.

Purdue President Mitch Daniels said the deal was to open Purdue to a new pool of students – specifically, working adults and those suited for online higher education.

Daniels says the decision comes after almost half-a-year of discussion and the realization that starting an online education program from scratch would be costly and might prove less efficient than simply acquiring the resources of an existing firm.

Kaplan, which has been owned by the Washington Post Company for more than 30 years, will transition its model to that of a public university, with Purdue paying one dollar to use Kaplan’s services and Purdue getting to keep the first ten million dollars of profit for each of the first five years of the deal, according to documents filed with the Securities and Exchange Commission.

This is where it all gets a little hazy.

The acquisition is designed to limit Purdue’s early financial costs, according to Inside Higher Ed.

Purdue is paying almost no up-front cost and will instead pay for the acquisition by buying back support services from portions of Kaplan that will remain a for-profit company under parent Graham Holdings. The service agreement lasts 30 years, with an early-termination option after six years.

Critics say the length of the deal itself is dangerous. In a column for the Chronicle of Higher Education, Robert Shireman, a critic of for-profit institutions, writes that the financial penalties for pulling out early hamper the deal. If anything were to go wrong, and Purdue pulls out, that exposes Purdue – and Indiana taxpayers – to losses.

So, who does what now?

It’s not that Purdue is outright buying Kaplan. It will very much be a partnership.

Kaplan’s side of the deal tasks them with management, including editorial services, marketing and advertising, human resources, technology services, test preparation and front-end student advising.

Purdue will be in charge of academics, standards, degree requirements, curricula and faculty.

Shireman points out that the deal places few limits on the way Kaplan Inc. can market other services and programs to current and prospective New U students. He says the value of the contract is enhanced for Kaplan in ways that could undermine Purdue’s brand.

What degrees will people get?

New U will offer degrees from certificates to doctoral degrees. Whether this will be a Purdue University degree, a degree from New U or something else remains to be seen.

What are faculty saying about this?

Well, many aren’t happy. In fact, members took a strong stance against the unorthodox acquisition. The Purdue University Senate passed a resolution calling the deal a violation of common-sense educational practice and respect for Purdue faculty.

The resolution condemns the school’s Board of Trustees for entering into the deal with little faculty input and asks for all such decisions to be rescinded.

In a blog post, Bill Mullen, a Purdue professor of English and American Studies, blasted the university for privatizing degrees from public higher education and what he calls dumbing down Purdue’s degrees. He criticizes Daniels for working with Graham Holdings, a publicly traded company in charge of Kaplan.

In purchasing Kaplan to make money for Graham, he has sold the Purdue brand to Wall Street, continuing the trend he began as Governor of Indiana when he slashed millions of dollars to public education, created the largest school voucher program in the country, and attacked teachers and teachers unions. Indeed, the Kaplan deal stabs Purdue faculty hard in the back. They were never consulted about this plan, even though it is their work and excellence that has made Purdue one of the elite Universities in the world. Daniels’s dirty deal with Kaplan permanently stains Purdue’s academic reputation and ruthlessly exploits the labor of its students, staff, and faculty.

Betty Vandenbosch, who is currently leading Kaplan University, is expected to transition into a chancellor role with New U, once the merger is completed. That would need to be signed off by the Indiana Commission for Higher Education.

Presumably there will be upgrades and changes in the degrees and courses offered between Kaplan and New U.

The new university will formally begin operations upon approval from the U.S. Department of Education and the Higher Learning Commission. Purdue plans to take immediate steps to commence those approval processes.