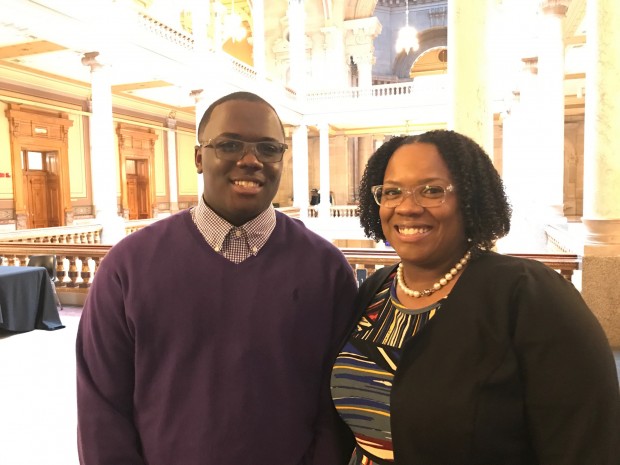 Caleb Cureton, 14, and his mom, Shana Cureton-McMurray, testified before the Senate education committee this week in favor of a bill that would increase funding for after school programs. Cureton says his experience at the Boys and Girls Club in Columbus broke him out of his shell and exposes him to many parts of his community. (photo credit: Claire McInerny/ Indiana Public Broadcasting)

This week at the Statehouse we saw our first major budget asks for education funding and a slew of bills moving through the process.

Here are the highlights.

“It’s trying to increase some of the rigor for our authorizers of our charter schools,” says author, Rep. Bob Behning (R-Indianapolis).

The bill is headed to the House floor, though some battles remain.

Rep. Vernon Smith (D-Gary) attempted numerous amendments to specify who can be on the board of a charter school and where meetings can be held. All amendments were shot down.

Over the next few weeks we’ll be zeroing in on some of specific provisions. Here are a few:

Charter schools have grown from 11 in 2002 to around 90 today. There are eight charter school authorizers.

Expanding state-funded preschool is one topic most Indiana lawmakers and Gov. Eric Holcomb agree on. However, two things remain to be settled in House and Senate legislation: how much of an expansion and at what cost?

This week, some Democrats are saying they will not support HB 1004 because it contains a provision that includes private school vouchers. Rep. Bob Behning, R-Indianapolis, the chairman of the House Education Committee, wants state-funded On My Way Pre-K program to become a new “pathway” for families to be approved for the Choice Scholarship program.

A string of Democrat amendments Tuesday night failed to strip out the voucher language and the bill passed committee 9-4 with only Republican support. Expect more debate on the House floor.

Read more about this issue from earlier reporting this week.

Out Of The Senate: U.S. History Class

SB 117, a bill about U.S. history courses passed out of the Senate. It is now waiting until bills switch to the House, where that chamber will put it through its own vetting process. The bill lays out required components of every U.S. History course taught at Indiana high schools:

This week in the Senate’s education committee, two bills were presented for the first time, both warranting a lengthy discussion.

First, SB 88 would require all schools, public and private, to wait until Sept. 1 to begin the school year. Many school districts around the state use a balanced calendar, which means the breaks are spread throughout the year– longer Spring Break, Winter break and Fall break instead of a huge chunk off in the summer.

The author, Sen. Jean Leising (R-Oldenburg), says she wrote the bill after speaking with constituents. She says a shorter summer break doesn’t give teenagers enough time to get a summer job or employers to find high school labor. She also says parents have trouble finding childcare for long breaks, throughout the year, instead of one childcare provider in the summer.

Business leaders, such as the CEO of Holiday World and many lobbyists for hotels and restaurants testified in favor of the bill. They say, when summer is shorter, people take fewer trips and their businesses suffer.

But senators on both sides of the aisle pushed against the idea of all school districts starting at the same time. They think that should be a local decision.

For example, Speedway Schools may want to wrap up for the year before the Indy 500, which takes place in their area. And many school districts near a college or university align with those calendars.

This idea has been proposed before and not put into law.

Since it’s a budget session, many bills address money, and this week the Senate had its first hearing on one that would give grants to after school programs. These grants would be given to help programs that serve students in grades 5-8 expand or improve quality.

There is no set amount of money being requested in the bill, but it has bipartisan support in the Senate.

Shana Cureton-McMurray and her 14-year-old son, Caleb Cureton, each testified before the committee about the importance of having high quality after school programs in every community.

When Cureton-McMurray moved to Columbus after leaving a domestic violence situation, she sent Caleb to the Boys & Girls Club every day after school and every day in the summer, because she knew it was a safe place for her son to spend time while she attended nursing school.

Caleb says his experience at that program helped him build his social skills in a less structured environment than school, and Cureton-McMurray says she hopes all tweens have access to this experience.

“If kids have this opportunity, especially in those critical ages, in the fifth through the eighth grades, it has the ability to change their lives and change the type of people they are,” she says.

One of the bill’s sponsors, Sen. Dennis Kruse (R-Auburn), says, if the rest of the General Assembly does agree to this funding, it will likely start off as a small amount.