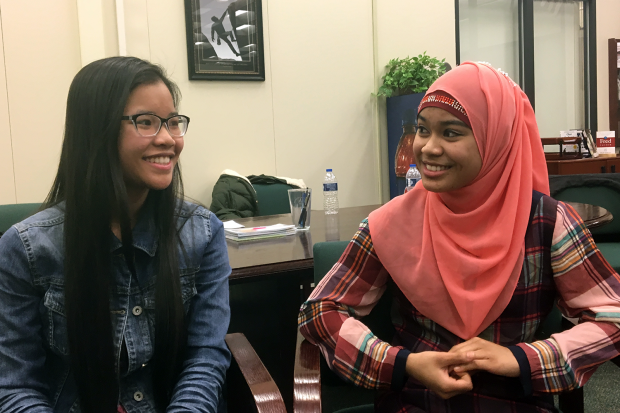 Hser Muh Htah and Na Da Laing are two Burmese refugees who attend East Allen University, a college prep public high school in Ft. Wayne. The school is located in a neighborhood where many refugee students live, meaning the school is changing its tactics to help English learners get through the program and to college. (photo credit: Claire McInerny/Indiana Public Broadcasting)

Shannon Eichenauer stands at the front of her classroom, explaining an assignment to her junior English class. Groups of students will debate each other over frequently banned books.

“You’ll be graded on how well did you argue that your book shouldn’t be banned or should be banned,” she tells her class at East Allen University.

Na Da Laing’s group is assigned Animal Farm, and so far, she’s read about half of it.

“I know conflict will arise, because the leader, Napoleon, is going to break the rules of killing someone. I think the animals are going to go against him,” Laing says.

Laing’s ability to analyze a piece of literature is expected in this class – it’s dual credit, meaning students earn both college and high school credit. But for Laing, it’s a huge accomplishment to be here, because a few years ago, she couldn’t speak English. She’s Burmese, and came to the United States eight years ago after living in a refugee camp.

She started school when she arrived in the country, and says it was hard.

“I struggled in elementary school because I was different from other students. I couldn’t speak English at all,” Laing says.

She was put in an English learner program in elementary school, and is now considered proficient in the language. And in Fort Wayne, there are hundreds of kids like Laing.

In the early ’90s, Fort Wayne was a federal refugee resettlement area for refugees from Myanmar, formerly known as Burma. The Burmese refugee community population in Fort Wayne is in the thousands, making it one of the largest in the country.

One Of The State’s Few All Dual Credit Schools

Burmese refugees are present at all of the schools in Fort Wayne, but the high school Laing attends, East Allen University, is a little different.

EAU is a public high school, anyone can enroll, but it focuses on college prep and getting high school students college credit.

“Students can earn their high school diploma and an associate’s degree in a four-year period,” says Principal Doug Hicks. 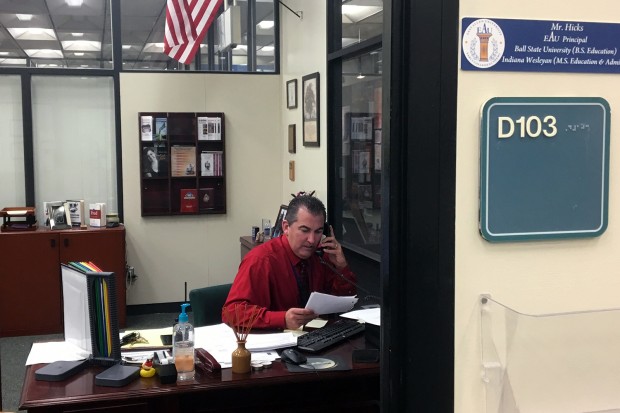 Doug Hicks is the principal at East Allen University in Fort Wayne, a public high school that allows students to receive 60 college credit hours by the time they graduate. Because of where this high school is located, many refugee students attend the school. (photo credit: Claire McInerny/Indiana Public Broadcasting)

Hicks says the program at his high school offers dual-credit classes starting freshman year, and when most students graduate, they earn an associate’s degree or have around 60 college credits to put toward a degree. He says the district started this program five years ago to help with college preparedness. The program is located in one of the poorest parts of the city, where many of the refugee students live.

Burmese refugees account for around 20 percent of the student population, and Hicks says, they are some of his best students.

“They have all of the indicators that they shouldn’t be making it,” Hicks says. “They don’t speak English in their household, the poverty piece, they didn’t live in the country from day one, they have all the strikes against them that we would think, as educators, would keep people from achieving. Yet, they continue to do it.”

The Challenges Of Getting English Learners To College

But their academic success doesn’t come without struggle. First, even if they are proficient in English, there are cultural hurdles in the classroom. Eichenauer, Laing’s English teacher, says plagiarism is one issue.

“Typically, in a lot of other countries that our students are coming from, like Thailand, it’s a compliment to share another’s words and not necessarily cite it,” Eichenauer says.

Eichenauer also says the books she teaches in her English class prompt interesting conversations between refugee students and American-born students. Like when she teaches The Great Gatsby, and explains the characters are drinking alcohol during prohibition, the American students don’t think twice about it.

“Then you have some Burmese students who don’t understand. To them, why would you break the law?” Eichenauer says.

Staff and administration at East Allen University say the dual-credit structure is especially helpful in navigating this obstacle – and others. Many of the Burmese parents have no understanding of the American college system.

But this program was designed with a robust college counseling program, tutors, and teachers with college level teaching experience. These staff members are crucial in helping the refugee students understand how college works.

Principal Hicks says with refugee students, even the simplest parts of a college application can be tricky.

“One thing we’ve run into here is social security numbers and how old they are and that type of thing,” Hicks says.

When she graduates high school next year, Laing will be the first in her family to have career options. Her parents left school before eighth grade to start labor jobs back in Myanmar, which means at her house, there’s a huge emphasis on succeeding in school.

“I kind of feel a little pressure, because I’m going to be the first person to go to college,” Laing says. “I’m scared that I’m going to mess up on my way, since there’s no one to really look up to.”

After graduation, her plan is to attend Indiana University-Purdue University at Fort Wayne, and work part time to support her parents. As for academics?

“I want to major in education and communication, bachelor’s degree,” Laing says.