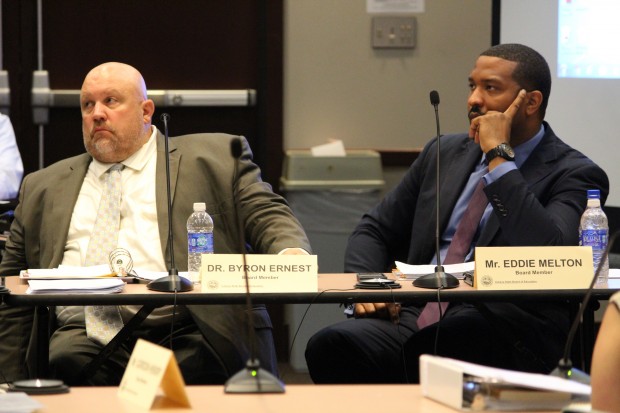 In this file photo, state education board member Eddie Melton listens during a state board of education meeting last year. At Melton’s request, the board approved Carrie Gosch Elementary to apply for disaster relief from the state. (Rachel Morello/StateImpact Indiana)

About 430 students from Carrie Gosch Elementary School will be relocated to a new school across East Chicago after toxic chemicals were found in nearby soil.

The highest levels of lead and arsenic were found in the West Calumet Housing Complex located next to the school, but a small portion of lead was also found on a corner of school grounds.

Students will instead attend class in a closed, former middle school across the city.

“The most important thing was to make sure that these students right now have a safe place to be when school starts,” said Eddie Melton, a state board of education member.

Melton represents the congressional district where the school is located.

At Melton’s request, the state board approved the district to apply for a disaster loan to combat the situation at Wednesday’s state board of education meeting. The district has not announced how much money it will request.

As The Munster Times reports, the U.S. Environmental Protection Agency says it’s not technically necessary to close the school down from a public safety standpoint, but school officials opted for a cautious approach.

A Carrie Gosch parent told the Times that she was relieved that students would be going to a different school, since she was concerned that students who walk to school might track lead and arsenic into school even if it’s now uncontaminated.