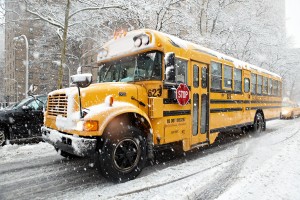 Over the last decade, school districts across the state have cut bus routes to save money – making moving students to and from school a much bigger chore. A bill that passed the state Senate aims to free up local tax dollars to help the schools, but the bill can’t solve the long term budget shortfalls at the root of the problem.

One of the bill’s authors represents the state’s second largest school district, which cut 2.5 million from its transportation budget late year.

Getting To School In A ‘No Transportation’ Zone

It’s the end of the school day at Forest Park Elementary School in Ft. Wayne, and students are running past teachers to their buses.

But there are fewer students getting on fewer busses this year. Like many districts across the state, Fort Wayne Community Schools cut its transportation budget after state mandated property tax caps went into effect.

Students living between one to two miles from elementary, middle and high schools are now in a ‘no transportation’ zone and required to walk or get a ride.

“Somebody’s got to get up, drive them over and drop them off or walk them or what not,” says Patrick Herber, who sent his oldest daughter to kindergarten in Fort Wayne this year. “There’s not too many parents that I’m aware of that are going to let their kindergartner walk all by themselves when it’s dark and below freezing up to a mile to go to school.”

Fort Wayne Community Schools sold 50 buses this year. Over 23 percent of the district’s students are affected.

District officials say they operated from a surplus for a number of years after the property tax caps passed.

“So for about three or four years our transportation fund was pretty much living off its cash balance. But that is now depleted,” says Julie Hollingsworth, the Fort Wayne school board vice president.

“So last year we had to cut $2.5 million from our transportation fund.”

Where Has All The Money Gone?

The State Legislature permanently capped property taxes in 2010, which effectively cut a big chunk of money for school corporation budgets.

Statewide, in the last five years, a handful of districts looked into canceling their bus service all together, and many others cut language programs or staff because of property tax caps.

The property tax cap was a Republican led initiative. In 2010 the General Assembly made the caps a permanent part of the state Constitution, and almost 75 percent of voters approved it.

If passed, the bill would free up property taxes from TIF districts – money earmarked to help redevelop run down areas of a city or build infrastructure – not to fund school buses.

“And for example, if all the TIF dollars in my district were available for the schools it’d be $750,000 roughly,” says Brown. “Now, some of them will be committed to projects in the community, but if not this allows for the redevelopment.”

This has been done in a number of districts across the state, but Brown says it’s not legal in all municipalities and Senate Bill 280 would open this option to everyone.

But Greg Leatherman oversees TIF money in Fort Wayne and says, while it might become legal to consider transfering $750,000, it isn’t something the school district can count on.

“I don’t know where that number came from and even if it was an accurate number to reflect all the income that came, a significant portion of that increment couldn’t be used for this problem because it’s already committed to something,” Leatherman says.

If Ft. Wayne schools did get the maximum amount of TIF dollars in the city, the $750,000 dollars would not cover all 50 buses dropped after last years cut of $2.5 million. Fort Wayne school board vice president Julie Hollingsworth says it’s a start but TIF money isn’t a long term solution, because the district would have to ask the city for it every year.

“So you can’t budget for it,” says Hollingsworth. “It would be irresponsible to say we hope we get that money and then add 25 bus routes next year and then be faced with the possibility where we have to cancel them again.”

The city has looked into ways to make walking to school safer – like funding more sidewalks.

“If the question is whether I’d be willing to pay higher property taxes for it, I suppose I would,” says Herber. “Because I’m paying more now because my wife, twice a day, jump in the car, drive over to the school, pick up the daughter, sit in line and do all those things. At the end of the day I’m sure I’m paying more than what property taxes would go up.”

After passing the Senate the bill now rests in the House, where it’s chances of passing are good.