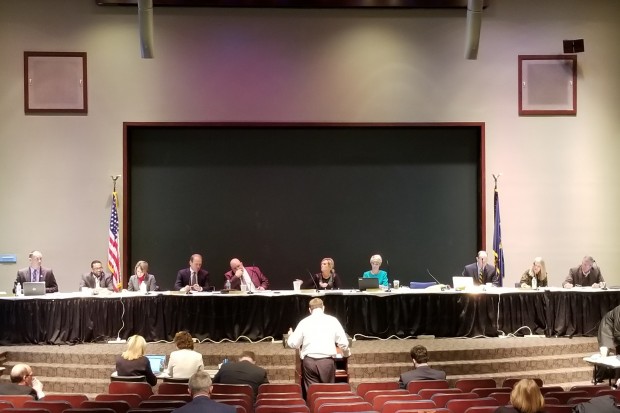 The State Board of Education debated which version of a proposal to release for public comment at its first meeting of the year. (Jeanie Lindsay/IPB News)

Significant changes are in store for the state’s school grading system, but the State Board of Education had trouble finding a starting point at its first meeting of 2018.

The State Department of Education worked on a new education plan last year due to the federal Every Student Succeeds Act, or ESSA. That included possible changes to the way Indiana grades schools, but at their monthly meeting Wednesday, the Board of Education approved a plan with some key differences.

Their proposal would give more weight to test scores in school grade calculations instead of student growth, and that idea faced pushback. Steve Baker, principal of Bluffton High School, says those new details go against past comments on changes to the grading system.

“This proposed rule – this new one – places much more emphasis on proficiency of tests,” Baker says. “And it does go against public input.”

After Baker’s testimony, members debated the starting point of that process at length. Board member Gordon Hendry says he took issue that new comments from some members were added into the drafted proposal via email.

“I agree with some of the comments that have been made, to me it’s more of just kind of where do we start from,” Hendry says. “And then we all can sit in a public meeting and have that discussion about how the language should be changed”

Now, the board’s proposal will enter a public comment period for people to offer their feedback.