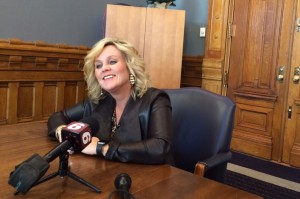 Superintendent of Public Instruction, Jennifer McCormick, speaks with members of the press after unveiling her priorities for 2018. (Jeanie Lindsay/IPB News)

State superintendent Jennifer McCormick released her priorities for 2018, and those strategies target three areas: student learning, operational effectiveness and school improvement. In this last category, she says she wants to make it easier for teachers licensed in one content area to teach an additional subject if they have the experience.

“Because we’ve had a lot of superintendents call saying ‘I have a great teacher who I know could teach algebra but because of their license they are restricted,” she says. “They’re tutoring our algebra kids. They’re doing a good job. They fill in when our algebra teacher is out.”

McCormick says districts should have more power to determine whether instructors are qualified to teach in an additional content area instead of relying on requirements that she says can push instructors away. She says reducing the number of hurdles teachers face to become and stay licensed could help retain more educators and help address the teacher shortage.

The department’s priorities for next year also include lowering the compulsory school age to 5 – a conversation McCormick says will help at-risk students. Currently, the state requires children age 7 and up to be enrolled in some kind of structured education. That means some students can enter elementary school with no previous formal instruction and can fall behind in skills other students may have already mastered.

School corporations dealing with fiscal challenges were another point in the department’s plans, and McCormick says she supports more flexibility for schools as they deal with funding problems. She added that models for allowing academically challenged schools to become innovation schools should be used to create a similar pathway for those in financial distress.

But aside from a major push for increased STEM opportunities, McCormick called it a “relief” that lawmakers have not proposed a significant number of major shifts in education for the upcoming session. Graduation pathways and diploma requirements, she says, have a heavy impact on students and classrooms, and that it’s important to focus on getting those right.

When it comes to revisions of graduation requirements, McCormick says she would like to see the Core40 diploma as the baseline for Hoosier students, making the general diploma as an “opt-out” or alternative option.

McCormick also hopes to address issues around accountability and data collection for schools as well. Some schools have raised concerns around the state’s grading system in previous years, and she emphasized the need to make the system “equitable, manageable, and understandable.”

All of the priorities listed, McCormick says, are a combination of items for the Department of Education, lawmakers, and the State Board of Education to address, and that some of those overlap. She says a strategic plan from the department will be released in early spring.