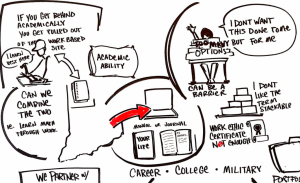 A “graphic recording” of the Graduation Pathways Committee’s discussion on Sept. 19, 2017, as illustrated by Mike Fleisch. (Courtesy State Board of Education)

A state committee recommended sweeping changes to high school graduation requirements Tuesday even as many of the details remain unknown.

If approved by the State Board of Education students, starting with the class of 2023, would choose from multiple academic tracts to satisfy three graduation requirements that are designed to better prepare them for college or career.

Reducing college remediation and filling a skills-gap saddling Indiana industries is a major focus of commerce, government and education leaders.

The committee also recommended ending the 10th-grade end of course exams, or ECA, as a graduation requirement and replacing it with a college entrance exam, such as the ACT or SAT. The change was written in a draft hours before the start of the committee’s ninth and final meeting.

Rep. Robert Behning (R-Indianapolis), a panel member and House Education chairman, says a college entrance exam would be a benefit to students going to college. Local educators have argued against keeping the ECA as requirement for graduation.

But stopping the ECA would require approval from the General Assembly. The U.S. Education Department would also have to accept a college entrance exams for its accountability requirement.

State superintendent Jennifer McCormick is in favor of using a college entrance exam as one option for students to qualify for graduation but says many questions remain about how the plan will meet federal accountability guidelines and the impact on local schools.

Yet some are pushing for the state board to vote on the plan Dec. 6 ahead of the 2018 General Assembly.

“It is frustrating to know that we are being told, ‘If you don’t make a decision quickly, then you are legislatively up against the wall,’” McCormick says. “That’s why I think it is important that decisions are not made in the 11th hour that impact generations of kids.”

Others remain concerned how low income, special need, and other students groups would be impacted.

Data from the state education department found nearly 10,000 students would not graduate under the proposed graduation requirements.

The cost of the proposed changes is also unknown.

The panel avoided answering concerns from local districts about the fiscal impact. Behning suggested state agencies would put together budget requests for the General Assembly if additional funds are required.

The state education department has estimated a $5 million cost for every high school student to take the SAT or ACT.

The Graduation Pathways Committee voted 13-1 to recommend the new graduation requirements to the State Board of Education. John Elcesser, Executive Director of Indiana Non-Public Education Association, was the sole no vote.

Elcesser said such major policy changes, such as ending the ECA, should require more public discussion than a single meeting.

Here is the current version of the recommended graduation requirements. Students graduating in 2023 must satisfy all three of the requirements by completing a pathway.

The State Board of Education will hold a work session 1 p.m. Dec. 5 to further discuss the plan. A board business meeting is set for Dec. 6.