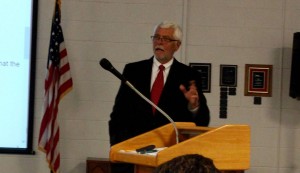 The financial officer for Muncie Community Schools says the financially impaired district could have a zero-deficit cash flow by December and a balanced budget next year. But that hope hinges on selling buildings by the end of the year.

According to Bob Coddington, the Muncie Community Schools chief financial officer, the district had a June cash flow of negative $8.2 million. In a Tuesday night presentation, that number is now negative $1.7 million. And then, in front of a school board that’s been getting state attention for its multi-million dollar debt, Coddington used the number zero.

“The board and Dr. Baule have been working feverishly, trying to rid us of our excess buildings and get the top dollar that we can get. I fully expect this number to be zero in December when that’s done.”

The district is selling multiple buildings and land – schools or former school locations that have closed, and one middle school that’s still open this year. Closing three buildings, reducing staff at those and other schools, and restructuring the district’s debt are what emergency manager Steve Edwards says has made the difference.

“Without the debt refinancing – and I emphasize that – and hopefully with the sale of some of the school properties, it would have been difficult to get through calendar year 2017 without paying some of our bills,” Edwards says. “It would have just been impossible.”

But Muncie Schools aren’t out of debt yet. Edwards says more staff reductions will need to be made and programs will need to be cut. He says he isn’t sharing what programs the Administrator Assistance team is targeting yet.

“You know, if we share about a program that we think needs to be modified or cut, that all the sudden, the supporters of that program – they bring out the troops,” Coddington says. “The people who are against it – they bring out [the troops]. And then we have another side show that we would prefer not getting into.”

Proposed budget details as written in the MCS school board agenda for Oct. 24.

Edwards didn’t share details of offers by Ball State University and potentially others to buy the buildings for sale that were due in mid-October. Under the state law Muncie Schools is living under, the school board does not have to approve the sale of those buildings.

On Tuesday night, school board members did approve a $67.8 million budget for 2018 that Coddington calls “balanced.”

“Pretty much a flat line budget. It’s a balanced budget in every fund,” Coddington says. “We’re going to have cash balances in every fund except the two that were starting with the minus. And we know that’s capital projects and the general fund.”

Per state rules, that budget now goes to the county auditor for about two weeks and then to the state, where property value assessments and tax rates will be discussed.