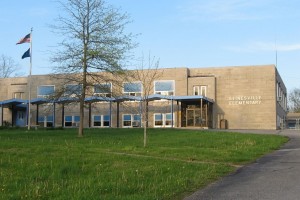 The Richland-Bean Blossom school board voted Monday night to close Stinesville Elementary school at the end of the 2017-2018 academic year as part of a larger facilities improvement proposal.

Community members gathered in the parking lot before the meeting started for public comment and an open vigil. Some brought handmade signs and posters asking board members to delay the vote and to “think of the kids.”

Parents, teachers and students spoke out during the meeting’s 30-minute public comment period.

Some expressed concerns about the closure causing overcrowding at the district’s other schools. But most of the commentary focused on the loss of a community.

Kylie Ayers told the board the community had been doing its own research after the last meeting through an online survey, but needed more time to come up with a proper solution to the issues with the budget.

“Closing Stinesville is putting a patch on a bigger problem,” Ayers said. “And you could hurt the Stinesville community in the process.”

After public comment ended, board member Dana R. Kerr spoke to the community on why the proposal was being considered. He pointed to low enrollment as a major factor, and said options to improve it through redistricting and expanding the school to serve grades K-6 rather than K-5 wouldn’t be enough.

The board voted 4-1 to move forward with the closure. Board President Jimmie Durnil was the only opposing vote.

Durnil says he voted no because of the community.

“Just to give them a chance to try to find solutions that they can bring to us,” he says. “To give them more time, basically.”

The closure was approved along with a six-year, $50 million construction project to improve the district’s school buildings.

Community members expressed frustration with the lack of notice about the proposal to close the school, but Durnil says the discussion, which involves dealing with a budget deficit, isn’t new.

“This process basically started years ago with concern over the Stinesville Elementary School and concerns over declining enrollment at the school,” Durnil says. “Officially, it got underway in April of this year when a long-range planning committee was formed to discuss the needs of all the buildings and what we’d need to do to increase enrollment.”

Durnil says the committee met nine times over the course of the summer to create a proposal, which included three options.

Katelynn Owens, the mother of a Stinesville student, says the board should have found an option that would help both Stinesville and the Edgewood schools. She says each of the options was too one-sided.

“They made it to where they had to decide between one school and another, one group of parents and children or another. There was no option where they could do both,” Owens says. “And to me that speaks volumes in, how well did you plan the options that you were going to present?”

Owens says she and other community members will continue seeking other solutions.