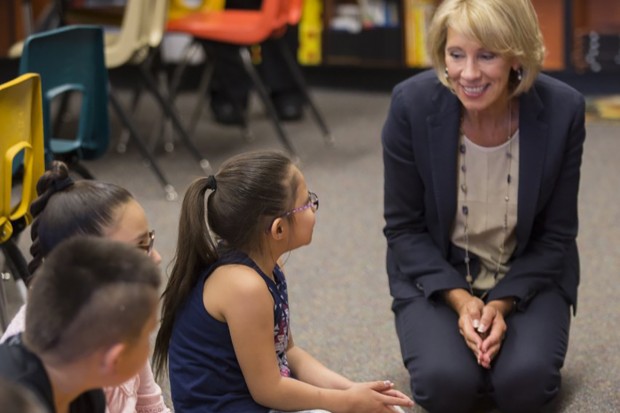 U.S. Education Secretary Betsy DeVos will visit schools across Indiana Friday as the last stop on a six-state back-to-school tour.

DeVos is highlighting schools that she says are offering innovative and groundbreaking curriculum and teaching methods.

“There are so many new and exciting ways state-based education leaders and advocates are truly rethinking education,” DeVos said in a statement. “It is our goal with this tour to highlight what’s working. We want to encourage local education leaders to continue to be creative, to empower parents with options and to expand student-centered education opportunities.”

21st Century Charter School recently gained national attention when a student graduated from the school with a high school diploma and a bachelor’s degree from a regional Purdue University campus.

Hope Academy is a charter school for students in grades 9-12 recovering from drug and alcohol addiction. Around 40 students are enrolled at the school located in the Fairbanks Addiction Treatment Center.

DeVos has said she wants less federal oversight in education and for parents to have access to more options, such as charter schools and taxpayer funded vouchers for private schools.

DeVos has used Indiana as an example of school reform done right.

In May, DeVos visited the high-performing private Providence Cristo Rey High School in Indianapolis while she was in town for the annual conference for the American Federation for Children, a school choice advocacy group. The school is part of Indiana’s private school voucher program.

In March, she praised the Indianapolis Public Schools district, saying more school corporations across the country should follow the “out-of-the-box” school management approach used by IPS.

DeVos singled out the eastside Thomas D. Gregg School 15 as a parent-led effort resulted in a new non-profit 501(c)(3) organization taking over management of the school in partnership with IPS.

DeVos, a philanthropist and former businesswoman, has been criticized by some for her her advocacy of school reform and for not previously working as a teacher or school administration.

She oversaw more than $1 million in political contributions to the state in support of private school voucher legislation through foundations she previously operated.