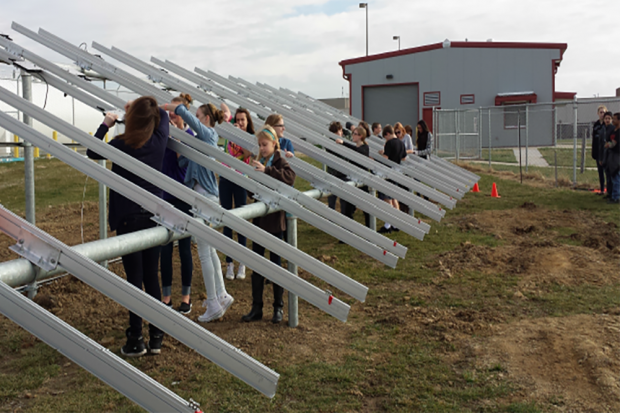 More groups – from utilities to businesses and even schools — are investing in solar energy. Its popularity continues to go up, while costs go down. But a law passed earlier this year by the Indiana General Assembly could spell trouble for the industry.

As you drive down the county road toward Lowell Middle School, you might be surprised to see three or four football fields worth of solar panels hiding behind the corn fields.

“And, at the same time, it looks like the future,” Deb Howe, Tri-Creek School Corporation superintendent, says with laugh.

The system cost about $3 million upfront, a hefty fee. But the solar panels will save the district close to $250,000 a year.

“We made that upfront investment,” says Howe. “And then we will generate 4 times that amount that will continue to be in our general fund that will aid in education.”

It’s more than schools investing in solar. The Ikea soon to open in Fishers will run on rooftop panels. And electric utilities are expanding their portfolios, partly because customers demand it.

“They want solar, they’re interested in solar and their expectation is that we can do it more efficiently so they’re looking for us to do that,” says Heath Norrick, renewable energy manager for Hoosier Energy.

And demand isn’t the only thing behind the expansion. Norrick notes “cost, cost, cost,” as another motivating factor. Hoosier Energy serves the most rural parts of the state on a nonprofit basis so, “being very conscious with our dollars that our end consumers are paying” is important, says Norrick.

Norrick says Hoosier Energy makes decisions on a 25-30 year timescale. So, the company’s not worried about rhetoric from the Trump administration on cutting support for renewables.

“There is a snowballing effect that’s begun to occur,” says Gallagher. “Customers like it, utility companies accept it and the cost is competitive, so we’ll see more.”

“We’ve seen pushback against rooftop solar and things like net metering in a number of states,” Gallagher says, “including in Indiana earlier this year with the legislation that was passed.”

Gallagher’s talking about hotly contested reforms to the state’s so-called “net metering” policy — now, future solar customers will receive less money when they sell excess energy they produce back to the grid.

The Indiana Energy Association, the lobbying group for the state’s utilities, fiercely supported the bill. The group says solar customers got an unfair “subsidy” paid for by the utilities.

But Deb Howe says there’s no way Tri-Creek could afford its solar system under the new law.

The district is grandfathered in, but Howe says she regrets more schools won’t be able to take advantage of solar.

“All the money that we use is tax payer’s money. If you don’t have to spend as much money for the electrical output, it can go back into supporting students,” says Howe. “Why would you not want that to occur? But you know, people are ingenious. Given a set of problems, they will come up with a solution.”

And a solution might end up presenting itself: a legislative committee is supposed to meet by the fall to study how school districts are affected by the bill.