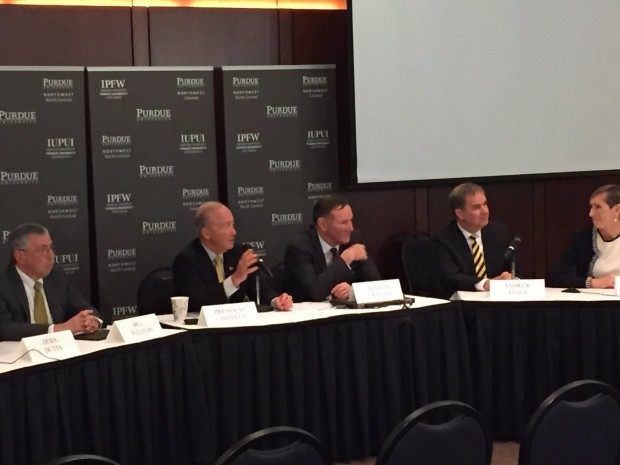 The ICHE is one of a handful of bodies that has to sign off on the merger before it can officially proceed and the educational offerings of the two institutions may become one.

Higher Education Commissioner Teresa Lubbers says her body doesn’t have all the facts about how the two schools will coordinate, but says the Commission was more interested in sending a message that approves of an attempt at innovation.

“Had the Commission acted in a way that would have decided to sort of not proceed with what is an innovative proposal that has the promise of serving student in a really promising way…we erred on the side of saying we believe this should go forward at this point,” Lubbers says.

Some detractors of the project have hoped Purdue will miss out on at least one of the necessary approvals, and the union will fade away. So far, all those procedural votes have gone in Purdue’s favor.

The project has been shrouded in secrecy, except for a few documents filed with federal financial regulators.

Purdue President Mitch Daniels has defended the initial behind-closed-doors negotiations as necessary to making such a business arrangement work.

Others have noted the Indiana General Assembly slipped eleventh-hour language into this year’s state budget creating a legal loophole that allows colleges to create so-called “public benefit corporations” that skirt most of the state’s public records laws — laws which otherwise apply to Purdue and other public schools.

Daniels has decried those sunshine laws as unnecessary in this case, because he argues they deal primarily with oversight of taxpayer dollars, which he says aren’t at issue in his deal.

However, that argument is muddied by another statement Daniels has frequently made: that he’s encouraging current Purdue professors – whose jobs are partially taxpayer-funded and who are subject to sunshine laws – to reach additional students through the Kaplan platform.