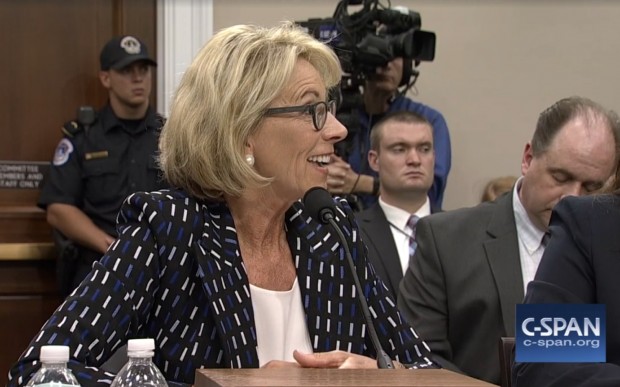 U.S. Secretary of Education Betsy Devos faces questions about a Bloomington school whose admissions brochure gives them the right to deny admission or end enrollment for students whose home lives include behaviors prohibited in the Bible, including homosexual or bisexual activity. (C-Span screenshot)

Betsy DeVos, the U.S. Secretary of Education, weathered a volley of questions this week about a Bloomington, Indiana private school that receives state-funded vouchers but reserves the right to deny admission or discontinue enrollment to students from lesbian, gay, bisexual or transgender families.

Bloomington’s Lighthouse Christian Academy was held up as an example of a private school that receives tax dollars but reserves the right to discriminate against students, as federal lawmakers questioned DeVos over a budget that plans to spend $1 billion on a federal school choice agenda.

“Is there a line for you on state flexibility?” said Rep. Katherine Clark, D-Massachusetts, referring to states choosing how to spend federal dollars. “You are the backstop for students and their right to access a quality education.”

DeVos refused to say whether her office would withhold funds from private schools that discriminate against students. It’s the latest development in the national dialogue over school vouchers, which allow families to receive tax dollars to pay for private school, and which the Trump administration has targeted as its educational priority.

Bailey says the school should not have to conform to what he calls the government’s “politically correct ideology on sexuality.”

Lighthouse Christian Academy was featured in our recent collaboration with NPR that investigated Indiana’s voucher program. In its online admissions policy, the Bloomington school includes LGBTQ identities under “behaviors prohibited in the Bible.” It continues to say that, “in situations in which the home life violates these standards” the school reserves the right to refuse admission or discontinue a student’s enrollment.

“A school should be able to teach in accordance with biblical sexual ethics, biblical commands, if it’s a Christian school,” Bailey says. “No family has applied that would be in violation of these biblical conduct requirements.”

When federal legislators questioned whether DeVos would “stand up” for LGBTQ students seeking to attend a school, DeVos testified she’d defer to states and parents on the matter.

“For states who have programs that allow parents to make choices, they set up the rules,” DeVos said.

Indiana’s voucher system, the Choice Scholarship Program, has garnered increased attention in the national dialogue in recent months. The program, which gives parents state tax dollars to pay for private school, is the largest such program in the country. The $146 million program pays for over 34,000 students to enroll in private schools.

Earlier this week, DeVos was in the state to praise Indiana’s voucher program. She visited a high-performing Indianapolis Catholic school that accepts voucher students.