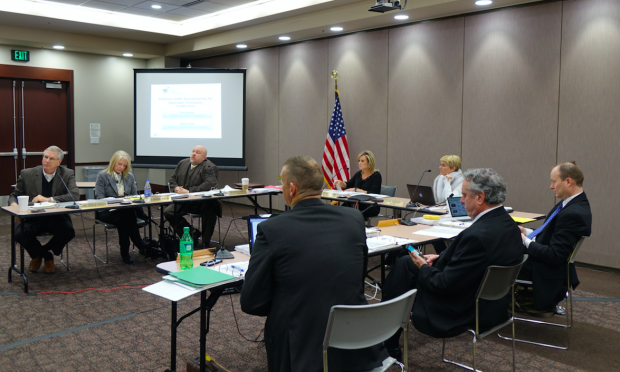 The Indiana State Board of Education. (Eric Weddle/WFYI)

As Gary Community Schools prepares for a state-hired emergency manager to take control, the seat on the state education board that represents the district remains vacant.

The same goes for East Chicago Schools as it faces a lead contamination crisis in the community.

The Indiana Board of Education member from the 1st Congressional District represents both areas. But that member, Eddie Melton, resigned from the board in November, after being elected a Democrat state senator.

Gov. Eric Holcomb, who took office in January, has yet to appoint someone to the vacant seat.

“It is a concern,” says Jennifer McCormick, state superintendent of public instruction and board chair. “I think the bigger picture is we want to make sure each district has a voice. I know the governor’s office also feels that urgency.”

The 9th District seat sits vacant, as well. Lee Ann Kwiatkowski resigned after she joined the department of education as McCormick’s chief of staff.

In all, 11 members sit on the board. The governor appoints most members. McCormick says having only nine members can cause slow down board business.

Earlier this month during a regular board meeting, one member was absent, leaving eight members to vote on a series of actions. State law requires six “yes” votes for an action to pass.

So when members cast a 5-3 vote to grant waivers to let formerly failing private schools become eligible for school vouchers — no action was taken and the waivers were not granted, due to a lack of votes.

Last month, Holcomb signed the law that created the waivers to help once-failings schools speed up their acceptance back into the Choice Scholarship program.

A spokeswoman for Holcomb’s office says they are working to fill the vacancies.

Since 2015, the 11-member board consists of the following members: eight appointed by the governor; one appointed by Speaker of the House; one appointed by President Pro Tempore of the Senate; and the state superintendent. No more than five members of the board can be from the same political party.