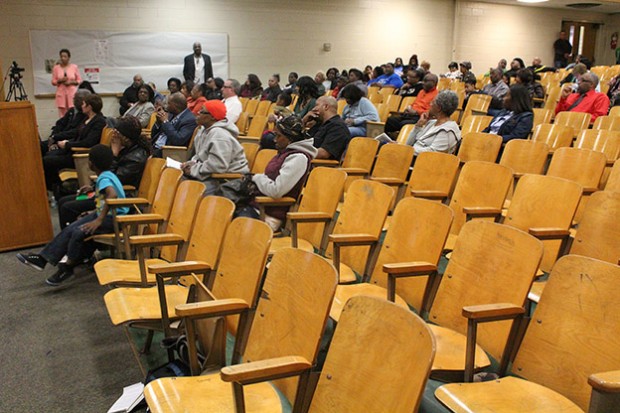 About 75 parents and community members attend a public meeting to discuss ideas for the Gary Community School Corporation in early April 2015. The district has faced financial issues for years, and now the state is assigning an “emergency manager” to help the district address its financial problems. (Photo Credit: Rachel Morello/StateImpact Indiana)

Charter schools or companies could end up assisting the financially-troubled Muncie and Gary school districts, rather than an individual, as decided during the 2017 legislative session.

A bill passed and signed into law this year allows the state to assign an “emergency manager” to the Gary School Corporation, and possibly the Muncie district, to help these school districts address severe financial issues.

The state recently closed its process to gather information from “qualified persons or entities who wish to be considered” for the emergency manager position. By opening up this request to “entities”, companies or education organizations could be in the running to help a public school district manage its finances.

While all the persons or entities that submitted a proposal isn’t public knowledge yet, Chalkbeat published a story last week that shows companies and other organizations are taking advantage of the opportunity. Chalkbeat obtained the proposal from Phalen Leadership Academies, a charter school that is bidding for the emergency manager position with Gary Schools:

Phalen Leadership Academies is part of a team bidding to be the state’s manager for the takeover of Gary schools. Tony Walker, a Gary attorney working with the Robert Bobb Group and a former member of the Indiana State Board of Education, shared the proposal with Chalkbeat.

Walker helped set up the match between Phalen and the Robert Bobb Group, led by the former emergency manager of the Detroit school district. Walker is board member of a Gary charter school, Thea Bowman Leadership Academy, that Phalen began operating last fall. At that school, he said, “they have done a phenomenal job.”

Because Phalen is managing a Gary charter school, Walker said they would be able to start work immediately.

The Indiana Department of Administration is currently reviewing all applications, so the rest of the interested parties will be made public once the state chooses an emergency manager.