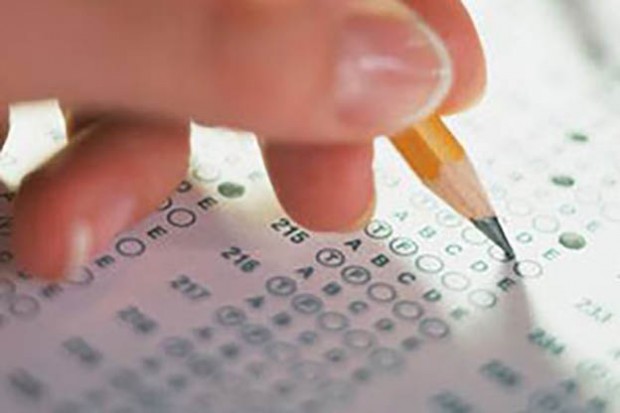 The legislature sent the governor a bill that changes the future of the state assessment system. (James Martin/Flickr)” credit=”

It’s (almost) official. ISTEP+ is out. ILEARN is in.

Students would be able to meet state graduation requirements under a number of options. Those include passing end of course assessments, achieving a certain score a college entrance exam like the SAT or ACT, passing international baccalaureate or advanced placement exams or receiving industry certifications.

The state board of education would determine how each pathway operates.

The new test and graduation requirements are set to take effect during the 2018-2019 school year, barring any unforeseen moves by Gov. Eric Holcomb.

“Oh, I think we really hit the ball out of the park on ISTEP,” says House Speaker Brian Bosma. “The new ILEARN test is estimated to be… if the state board of education and superintendent follows the recommendations made, we are going to be cutting test time, it is estimated in about half. The expense goes way down. It is going to be back extremely fast. I think it is going to be a game changer for testing.”

With this move, Indiana lawmakers seek to wrap up the state’s saga with the much-derided ISTEP exam.

If signed into law, the new testing legislation would:

Still, the most substantive part – what this new test will actually consist of – remains up in the air.

The legislation requires the new test to “hold schools accountable for preparing students for college and careers” and be aligned to Indiana’s education standards. Beyond that, it does not go into specifics.

It mandates, instead, that state superintendent, with the approval of the state board of education, is responsible for the development, implementation and monitoring of the ILEARN program.

Earlier this year, Jennifer McCormick, state superintendent of public instruction, warned lawmakers of Indiana’s past missteps when it designed its own standardized test. McCormick called for using a so-called off-the-shelf test.

The State Board of Education is mandated to make the final choice on a new testing vendor based on department recommendations. Testing experts have told lawmakers Indiana does need a somewhat unique exam since Indiana’s academic standards are unlike other states.

In 2014, Indiana rejected Common Core standards when the legislature passed a bill requiring standards to be locally-created. By 2014, Indiana had also withdrawn from the PARCC testing consortium and find its own path to testing.

But a federal waiver obliged the state to give a test.

The ISTEP+ test was quickly developed and implemented – some thought too quickly. Since then, the test has come under fire for its length, subject material, lack of field testing and technical problems.

Vernon Smith (D-Gary) says the new legislation is a lost opportunity to reform testing in grades three through eight, where state and federal law require it annually.

“We really need to do a revision of the whole process,” Smith says. “And probably stop putting so much emphasis on this testing craze, in general.”

Notably, the new legislation pulls a provision attaching student test scores to teacher evaluations, during the 2017-18 school year. The topic has become increasingly controversial, as the validity of standardized test scores in Indiana has come increasingly under question.

District superintendents, the Indiana State Teachers Association and the American Federation of Teachers-Indiana have called for permanently removing test scores from teacher evaluations until a new test is implemented and verified to be accurate.