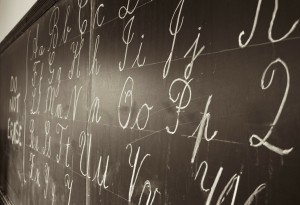 A stand-alone bill failed at the Statehouse earlier this year, but the penmanship issue got folded into another bill. (Pixabay)

“Should learning cursive be necessary?”

That’s the question Indiana lawmakers voted Thursday to require the Department of Education to ask school teachers, administrators, and school boards. A bill now heading for the Governor’s desk mandates the department to survey whether those groups are in favor or opposed to mandatory instruction of cursive writing.

Cursive writing, whether it’s crucial for schooling or a relic of the past, has been debated for years in Indiana.

For half a decade, Sen. Jean Leising (R-Oldenburg) has crusaded to ensure that Indiana law requires schools to teach cursive. The Indiana Department of Education made cursive lessons optional beginning in 2011. Leising proposed legislation each year since to require schools teach the penmanship style in which some characters are written joined together in a flowing manner.

This year, the issue, albeit a watered-down version, got its day on the floor.

After a standalone bill to require cursive failed at the Statehouse earlier this year, lawmakers folded the penmanship issue into a bill requiring schools to offer a one-semester elective on Indiana history. Language in the bill stops short from requiring schools to teach cursive, as the original language intended.

Instead, it mandates the department of education seeks out educators’ opinions on the topic and asks about current practices.

“I think the survey is a great way of finding out what’s really happening in the schools,” says Rep. Sheila Klinker (D-Lafayette). “Are we teaching cursive writing, or are we just allowing the children to print?”

Klinker says writing courses should cover cursive so students can read historical documents written in cursive – and process documents in the future.

“When you sign a mortgage, or your taxes and other documents that are very important, you usually want someone to write cursively,” Klinker says.

Still, it’s an issue that Indiana lawmakers have declined to substantively take-up or require for the past five years. Until now, lawmakers have killed the handwriting issue almost immediately. Cursive is not part of Indiana state tests, which have increasingly moved to digital technologies.

At least eight states have passed laws requiring cursive writing to be taught, according to the Education Commission of the States.