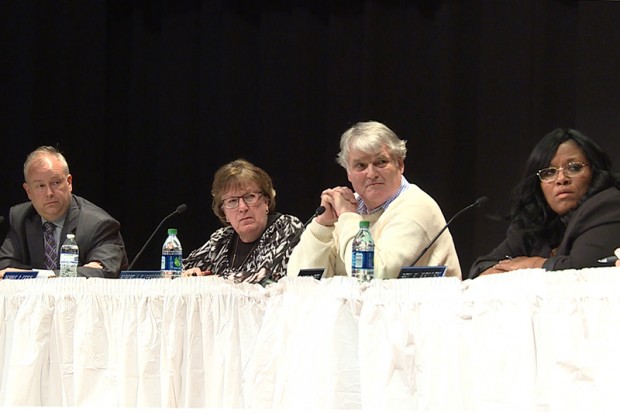 The Muncie Community Schools school board held an emergency meeting last week to discuss ways to reduce the district\’s debt. This comes after the legislature include Muncie in a bill that would assign a state appointed financial advisor to the district, to help reduce the $19 million debt it currently carries. (photo credit: Lauren Chapman/Indiana Public Broadcasting)

Muncie Schools are pushing back against a bill in the legislature that would allow the state to intervene in the district’s finances.

Here’s what’s at issue – should the state take over the financial management of a school corporation? On one side, Gary Schools say yes, they want state help.

The conversation started this legislative session. Senate Bill 567 allows the state to appoint a financial advisor to help Gary Schools stay solvent. That district is struggling with declining enrollment and other financial setbacks.

Then state lawmakers received a report from the State Board of Accounts, and lawmakers added Muncie Community Schools to the financial intervention bill.

“Muncie rose to that level because they were over $10 million in operating deficit,” says House Ways and Means Chair Tim Brown. He says the state is intervening now, because Muncie hasn’t made tough financial choices to help its situation.

“There have been a lot of schools [that] have made the necessary cuts, have closed buildings,  have looked at even small amounts of spending that was out of alignment,” Brown says. “So what do you say to them when you have these other corporations who aren’t making the necessary changes?”

Taken all together, Muncie Community Schools has almost $19 million in debt and outstanding bonds.

In February, then-chief financial officer for the district, Bruce Perry, presented what he called  “problematic” and “unhealthy” financial practices to the board.

He said the district borrowed $9 million from itself to make payroll, taking money from a fund dedicated to building repairs and construction.

It’s not illegal, but the district must pay itself back. Perry resigned the week of that meeting. The district is now looking for its fourth CFO in this school year.

When this rose to lawmakers’ attention, and Brown and other Republicans added Muncie to the financial intervention bill. District representatives objected. Brown says he understands.

“I understand at a personal level that somebody is saying something you don’t want to hear right now,” Brown says. “So I understand that the people and the citizens of the community are reacting in a way that is very personal so that is important.”

Community members, parents, school staff, and many board members in Muncie are against state intervention. They held a special board meeting to formulate a plan to save money, in hopes of convincing the legislature to back off.

Not that the community doesn’t recognize there are problems. Many at the meeting said, while they don’t want state intervention, they do want the district to make dramatic changes.

And at the end of that meeting, the board voted to close three elementary schools. It did not consolidate the two middle schools, though data shows all middle school students in the district can fit in one building.

Board member Bev Kelley voted against the plan, saying sudden changes aren’t the real progress the legislature is asking for.

And that’s what legislators say this financial advisor will help with, creating a long term plan to help the district get out of debt.