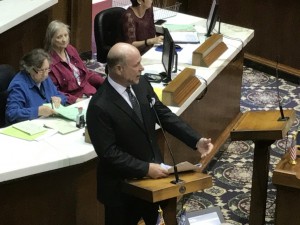 House Speaker Brian Bosma presents the bill to the full House that makes the state superintendent an appointed position in 2021. The bill passed out of the legislature and now goes to the governor. (photo credit: Brandon Smith/Indiana Public Broadcasting)

The House advanced a bill to the governor Tuesday to make the Superintendent of Public Instruction an appointed, rather than elected, position.

The original House version of the bill made the state schools superintendent an appointed position beginning in 2021.

But the Senate had defeated its identical version of the bill earlier in session. So that chamber had to make changes in order to comply with its rules about hearing a matter it already voted down. Those changes include pushing the date back to 2025 and adding qualifications, including an background in education and a two-year residency requirement.

House Speaker Brian Bosma (R-Indianapolis) reluctantly went along with those changes. He says he’d prefer no such restrictions.

“I would like to give the governor of either party that flexibility to pick some nationally-renowned, off-the-charts person that we all say, ‘Wow, we attracted this person?’” Bosma says.

“As a lifelong educator, I felt like my power was going to the voting booth when I disagreed with how everything was going, so I still feel like that’s very important,” Wright says.

The House approved the Senate’s changes by a 66-31 vote. The bill, a priority of Gov. Eric Holcomb’s, now heads to his desk.