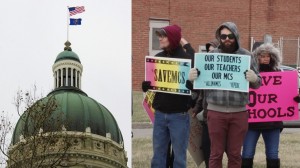 The House has approved a bill that gives the state permission to take over control of Muncie Community Schools and its financial crisis.

Local lawmakers and district Superintendent Steve Baule had asked the committee to be allowed to fix things themselves without state takeover. On the bill’s second reading on the House floor Wednesday night, an attempt to remove MCS from the bill led by Rep. Cherrish Pryor (D-Indianapolis) failed.

On the House floor Thursday, House bill sponsor Rep. Tim Brown (R-Crawfordsville) says he added Muncie to the bill because of its long-term debt.

“They have about $51.6 million of long-term indebtedness, and these are bonds they have taken out over the years,” Brown says.

Some lawmakers opposed the bill objected to MCS being added without their permission. And House Minority Leader Scott Pelath (D-Michigan City) says he worries which school district is next.

The House voted 77-19 to approve the bill. If signed into law, it would designate MCS as a “distressed political subdivision” and would appoint an emergency manager, financial and academic officers to make decisions.

These positions would outrank the superintendent and the school board. MCS would have to have a “positive cash flow” for two years before coming out of the distressed designation.

Because the bill passed by the House is different from the same bill passed in the Senate, a conference committee will work out differences before sending it to Gov. Eric Holcomb.