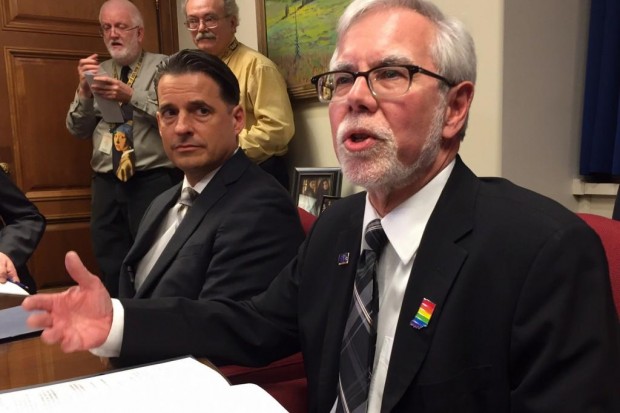 Senate Minority Leader Tim Lanane (D-Anderson) attempted to kill House Bill 1005 but narrowly lost when a vote was taken on the issue in the full Senate. (Brandon Smith/Indiana Public Broadcasting)

A bill that would make the state school superintendent a political appointee of the governor, passed the full Senate Tuesday despite attempts by Democrats to kill the proposal.

Sen. Tim Lanane, D-Anderson, led the charge to have House Bill 1005 pulled from consideration, arguing its intent was the same as Senate Bill 179. But his effort failed 26-24.

In February, the Senate voted down its own bill to make the state’s elected schools chief an appointed position. Around the same time, House lawmakers approved their version.

But Democrats say a chamber rule should have ended the issue this session. The rule says a bill similar in language to a defeated bill may not be heard again in the Senate.

Senate President Pro Tem David Long, R- Ft. Wayne, has said the bill was altered enough so the issue could be revived. Senate lawmakers amended HB1005 to add a state residency requirement for candidates and push back the year it would go into effect to 2024.

That was also enough for five GOP senators who voted against the Senate version to change their minds and support the House bill to give it a 28-20 pass.

Democrat Senator Greg Taylor argued that the bill takes away a public right.

“If we do this today, I don’t know if I can agree with you if you say we did the right thing for the citizens of the state of Indiana,” Taylor said to Long before the vote. “We are taking their right to vote away.”

Supporters of the bill say it will remove politics from the superintendent position, allowing this person to work in tandem with the governor’s office.The frequent clashes in the past four years between the former superintendent and governor – Democrat Glenda Ritz and Republican Mike Pence – has fueled support for the legislation this year.

The change is supported by Republican Governor Eric Holcomb. After the vote, he tweeted: “Pleased to see IN Senate advance the bill changing the Superintendent of Public Instruction to an appointed position. NextLevelAgenda”

If the bill is signed, Indiana will become one of nine states where the top education official is appointed solely by the governor.