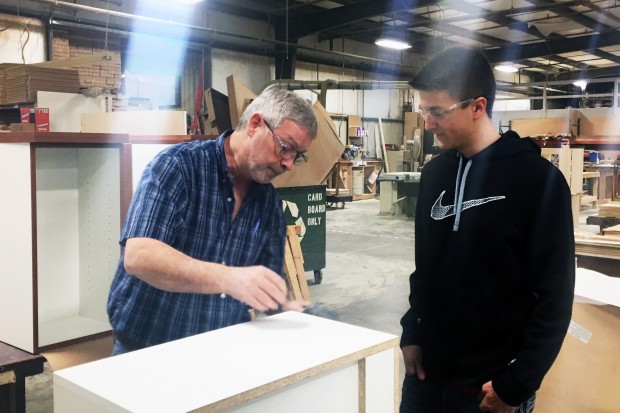 Manufacturing companies all over the state have open positions and can’t find qualified workers to fill them. These jobs require specialized training because the new world of manufacturing requires more technology-based skills. So companies are finding new opportunities to teach them.

The Problem In One Manufacturing Town

Batesville is a town of less than 7,000 people, and half a dozen manufacturing companies employ hundreds of them. But they would like to employ more.

This is a problem Brett Hofer, safety and training coordinator at Batesville Tool and Die, knows well.

“We’d post the positions for some of our technical, trade positions, and it would be really hard to find somebody who had those skills and could come in right away,” Hofer says.

Batesville Tool and Die is a metal stamping company that employs about 400 Batesville residents. Its main products are auto parts, and as technology evolves, its jobs requires more computer skills.

“If they’re having a problem with a part, if something is not to spec, they have to be able to get in there and find out what’s causing this, why is this doing this, and from there making the adjustment to the pieces,” he says.

So leaders at Batesville Tool and Die spearheaded an effort to create more workers to take these positions. They created a feeder system.

“Working with the schools we were able to get the 17-, 18-year-old students start coming in and seeing our facility and potentially getting them a head start in the training for some of our technical trade positions,” Hofer says.

This feeder system is a partnership between Batesville High School, the local Ivy Tech campus and a few Batesville manufacturing companies. They created a new program for high school juniors and seniors. Students spend half their days in traditional high school classes and the other half in manufacturing classes at Ivy Tech. Eventually they intern with a local manufacturing company doing entry level work. The hope is that both student and employer will want to continue the working relationship.

That’s exactly what happened with Caleb Pierson and his boss, Joe Meyer.

Meyer and Pierson walk through the wood shop at Heartwood Manufacturing, the company Meyer started and leads as CEO. On the big, loud, assembly floor, employees cut wood on large machines and furniture sits on the floor in various stages of completion.

Pierson shows off a set of cabinets he designed. It will be shipped to a hospital in another part of the state.

“On this job in particular, we went up, we met with the project manager of the hospital, measured all the rooms, they gave us drawings of what they wanted,” Pierson says. “Then me and him designed everything on the computer and designed it.”

Pierson is 19, and he learned the computer technology he used to design these cabinets in the Batesville High School program.

“Before I was in this program I really had no idea what manufacturing was,” he says. “I probably would have thought it was standing in a dark factory, not moving for 8 hours a day and just moving a part from one conveyer belt to another. I thought it actually sounded pretty boring.”

At the beginning of high school, Pierson thought he wanted to be engineer. But after seeing first hand what manufacturing jobs looked like.

“I realized I didn’t want to be an actual engineer,” he says. “I wanted to do something more along the lines of designing stuff but still being able to do the hands-on stuff,” Pierson says.

Which is exactly what he does now at Heartwood. He interned with the company his last year of high school, and when he graduated, he took a full time job as a designer.

“For us, it’s sort of an extended job interview over a two-year period,” Meyer says. “It’s hard to put a dollar figure on it, but without a program like this we spend a lot of time in the hiring and firing process, trying to determine if someone’s gonna last.”

This is the fifth year of the program, with two graduating cohorts. So far, the school district estimates, of the 10 students who have graduated, 75 percent are employed by manufacturing companies. And they plan to continue offering this opportunity, so students like Pierson and companies like Heartwood can continue to find each other.

“If it wasn’t for this program, I probably would have ended up going to college, because I used to think that’s what you had to do,” Pierson says. “So I would probably be somewhere spending a lot of money on an engineering degree, only to graduate in three years and learn that is not at all what I want to do. So this is saving me a lot of time and money and I know I’m in the right field I want to be in.”