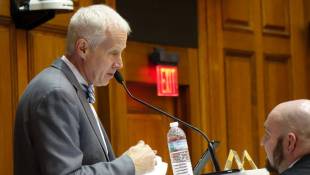 Under current law, private or religious schools in Indiana rated a D or F for two consecutive years in the state accountability system lose the ability to accept more vouchers through the Choice Scholarship Program.

Bhening’s proposal would allow the State Board of Education to decide whether a private school could remain part of the voucher program despite two years of low or failing accountability grades. This would be a similar approach to how the state board reviews failing traditional or charter schools.

Principal LaQuila Dunn of the private Turning Point Academy in Indianapolis wants the rule changed too.

Dunn said the changes to state policy, such as revamping the ISTEP+ exam and adopting new academic standards, caused the K-8 school’s scores to drop.

Turning Point Academy was unable to accept new vouchers after the 2013-14 accountability grades were released. It was rated an F. A year earlier it was a D. The school is now graded A.

“We are not here today to skirt accountability,” Dunn said. “All we are asking is that when there are extenuating circumstances you see there is something in place so we can appeal.”

But Democrats on the committee, like Ed DeLaney of Indianapolis disagree. He described Bhening’s proposal as one of a few bills this session “gaming the system.”

“We set up a lot of rules for what people got to do to get our money,” DeLaney said of the establishment of the voucher program. “Then when the rules don’t work out for some individuals we bend the rules.”

When private school vouchers were first introduced to Indiana in 2011, supporters said the law would allow poor families to escape failing schools. Holding private schools to a higher level of accountability than traditional public schools was a way to ensure academic quality, supporters also maintained.

Behning’s amendment No. 6 was approved by a 9-4 vote along party lines. It was added to House Bill 1384 that deals with changes to calculating high school graduation cohorts. A vote and further debate on the bill is expected during Monday’s Education Committee meeting.

Indiana’s Choice Scholarship Program has become one of the biggest private voucher programs in the county. It has grown exponentially from just under 4,000 students in 2011-12 to 32,686 students last school year. During that time, income and other requirements have expanded to make more families eligible.

A report on the program released by the Department of Education shows the program costs $54 million.