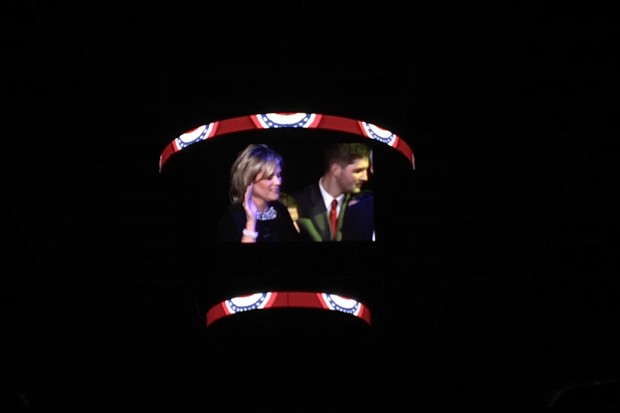 Republican Jennifer McCormick is sworn in as Indiana’s Superintendent of Public Instruction at an inauguration ceremony at the Indiana State Fairgrounds. She defeated Democrat Glenda Ritz in the November election. (photo credit: Claire McInerny/StateImpact Indiana)

McCormick replaces Democrat Glenda Ritz after defeating her in the November election.

During the campaign, McCormick criticized Ritz’s tumultuous relationship with other state agencies and policy makers, and said she would be a more collaborative leader.

She mentioned this during her speech after the inauguration.

“To all the other elected and appointed officials, I promise to be a good partner to the state of Indiana so we can move forward,” McCormick said. “To Indiana schools, I am proud to be one of you and I look forward to working with you.”

During her speech after the swearing in, McCormick didn’t go into too many details of her agenda as superintendent, but made one mention to the state’s teachers.

“I promise to lead this state as I always have, putting students first,” she said. “That means we must take care of Indiana’s great educators.”

Previously, McCormick served as superintendent for the Yorktown school district, and spent her career in public education.