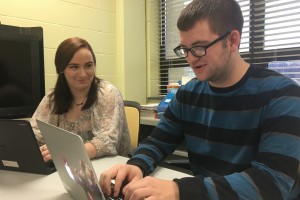 They are taking a field trip to the National Gallery in London, looking at Neoclassical pieces they’ve been studying. But the class of 30 didn’t need to travel for this field trip. Instead, students are taking a virtual tour of the museum, navigating the marble hallways and viewing gold leaf, vaulted ceilings on their laptops.

“There’s that horse again,” Parr says to the class, as her mouse hovers on a painting of a horse.

Parr says this is a big opportunity for her students, who live in the small, Southeastern Indiana town.

“We live pretty far out in the middle of nowhere, so taking a field trip is an all day thing,” she says.

And before today’s virtual field trip to the museum, Parr asked the class of 30 how many had been to an art gallery in person. Eight students raised their hands.

Investing In Technology Is A Huge Expense

It takes a lot of money to ensure 30 kids can take virtual tours on 30 laptops, and Milan invested hundreds of thousands of dollars in high speed internet and technology over the last few years. This kind of investment isn’t always an easy choice for small districts, who have been struggling more in recent years.

The current school funding formula is more challenging for rural schools. The money follows the student, and as rural populations decline, these districts with smaller enrollments are disproportionately affected. The property tax caps passed in 2010 also restrict district budgets. 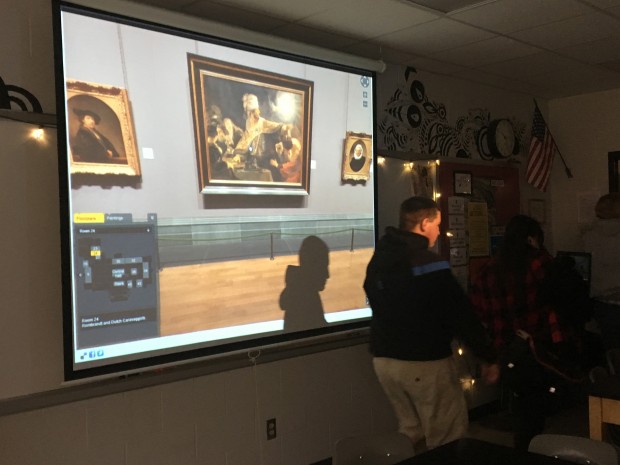 But reliable internet access is not just about fun experiences – like a virtual field trip. Online tools are necessary in today’s classrooms.

Educators agree on the importance of integrating technology into lessons, homework and daily activities, so students are prepared for the technology they’ll work with in the real world.

But many small, rural districts are struggling to upgrade to high speed internet. And, as the legislation session begins, many are hoping the General Assembly will allocate money to help them build their internet infrastructure.

Milan is the exception, but their high speed internet and laptops for every student came at a price.

“You push aside some things that you want to do in terms of repaving a parking lot, repairing some doors or windows,” says Milan Schools Superintendent Paul Ketchum. “You say the investment we make in this project is going to have an exponential effect on students.”

Ketchum says investing in high speed internet not only gives students opportunities in the classroom, it is often the only place they can access the internet and online tools.

“There is a digital divide in Ripley County, especially in our homes,” Ketchum says. “Many students don’t have access to high speed internet.”

Evan Smith is one of those students. He’s a senior at Milan High School, and Wi-Fi at his home is slow and limited. With so much of his homework online, he often works in the middle of the night when the internet is faster and available.

“The Wi-Fi is limited data from 5 a.m. to midnight, but midnight to 5 a.m. its unlimited data,” Smith says.

Some members of the General Assembly have talked about allocating money to help more rural districts do what Milan Schools did: Invest in internet infrastructure and devices so students like Smith can explore the world outside their small towns.

But this issue will compete for lawmakers’ attention in the new legislative session.

When Classroom Lessons Are Buffering

Two hundred miles away from Milan, in Morocco, Ind., North Newton Schools Superintendent Destin Haas walks into his office after a morning filled with problems. It’s cold and windy, and the boilers at one of his schools went offline. The boilers operate from a board connected to the internet, and the wind compromised one of the towers that provides the connection.

“With our towers, if we have inclement weather, whether it be ice, or snow or rain or strong winds, it’s going to affect our internet connections,” says Haas.

He’s one of the rural superintendents that hopes lawmakers will see internet infrastructure as a long-term payoff. Over the last few years, Haas spent a lot of money installing towers to increase bandwidth, but he’d rather install expensive, fiber internet to avoid the problem with weather.

He also purchased iPads for every student, but they can’t all use them at the same time because the bandwidth is just too slow.

“Streaming a video, or streaming music, and we’re in a digital age where we’re using those things, it’s almost impossible to do because of that factor right now,” Haas says.

They often stagger iPad use. And when they take the statewide standardized test, they ask teachers who are not administering a test to stay offline, so the internet doesn’t crash.

So, while legislators will have a lot of requests this budget session, Haas says this should be a priority.

“It would just be like them at the Statehouse and they’re not having internet capabilities, or only half of them can work at a certain time, they’re not going to like it,” Haas says.