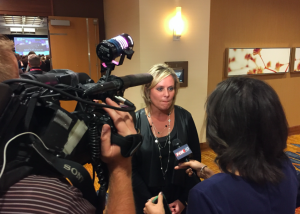 As 2016 winds down, there’s a lot to reflect on. A lot. While so much happened this year (seriously so much happened, I’m sure we blocked most of it out), we’re going to focus on the milestones of the Indiana education world: the most notable laws, conversations and changes in our classrooms.

When it comes to Indiana education, 2016 was the year of the ISTEP+. The year started with the 2016 legislative session, where lawmakers passed a bill to get rid of the ISTEP+ as it currently functions. They also created a 23-person panel to craft recommendations for its replacement.

The panel met once a month for six months, and its strategy had a broad frame. Members included teachers, principals, superintendents, legislators and state officials. This range of experience required a lot of discussion on both how standardized assessments function and how they are created.

Narrower conversations about specific changes to the test or testing administration did not take place until the the very end of the process, the second to last meeting before the Dec. 1 deadline.

The final recommendations to the legislature were broad and didn’t offer major changes to the testing system.

The fate of the new state assessment now rests with lawmakers, who will decide how much to reshape the old one. We recently heard from Sen. Dennis Kruse, the chair of the Senate education committee, that he will propose pushing back the deadline for a new test to make sure the revisions are well done.

What’s Next For State Funded Pre-K?

All year, we’ve heard many call for the state to expand its pre-K pilot program and serve more children.

State superintendent Glenda Ritz and former Democratic gubernatorial candidate John Gregg called for universal pre-K. A group of business leaders called on the legislature to expand the current program to just low-income families, and many candidates brought it up during the election.

Universal pre-K will not be on the table, now that both Ritz and Gregg lost their respective races. But all of the talk from different groups prompted the legislature to announce they will address the issues during the next session.

So… How About That Election, Huh?

It has some major implications for education.

In Indiana, we elected a brand new Superintendent of Public Instruction, the state’s highest ranking education official. The publicly elected office also heads the Department of Education and chairs the Indiana State Board of Education.

But with a Republican as state superintendent, the change could mean fewer squabbles between the Republican-controlled Legislature and the education department.

And we can’t forget that Indiana Gov. Mike Pence is now also Vice President-elect. So, Indiana’s education policies may soon make it onto the national stage. Largely in the form of school choice. Indiana boasts the country’s most robust school choice program, with the state spending $40 million to send more than 300,000 students to private schools. President-elect Donald Trump’s choice for secretary of education, Betsy Devos, is well-known for pushing programs and laws that require public funds pay for private school tuition in the form of vouchers.

For those of you who have been following our blog closely, you may have noticed we’ve spent a lot of time on the country’s new federal education law, the Every Student Succeeds Act. Fellow policy nerds (…I mean, you ARE reading an education policy blog right now…) will know ESSA was signed into law in Dec. 2015 and set to take full effect in 2017. So this year was largely – figuring out how to make sure the roll out goes smoothly.

The new education allows states more freedom to design administration and practices for rating schools and teachers, as long as they meet certain federal standards.

Much of the debate surrounded a still undetermined, non-academic factor that the state will measure as a way to measure schools’ progress. That factor could include school climate, access to AP classes, chronic absenteeism or disciplinary action.

Although the federal law allows states much more flexibility in test administration, teacher evaluations and school ranking, many of these elements are already written into Indiana state law. So tweaking those things, even though ESSA allows it, would require legislators to change the law.

The 2016 school rankings showed far fewer A’s. It also showed fewer F’s. Schools from the high and low rankings moved to the middle – many more schools ranked as B’s and C’s.

A few factors led to this. A change in the way the state ranks schools now measures students’ growth in test scores from year to year, rather than whether a student passed the test or not. And last year the state held schools harmless for lower test scores. In other words, the school was awarded the higher grade between their 2014 and 2015 scores.

So 2015 scores were higher than they may have been otherwise, possibly leading to a more drastic dip in 2016.

We have a database of school test scores here.

What were your favorite stories of 2016? What should we look for in 2017? Leave your answer in the comments below.