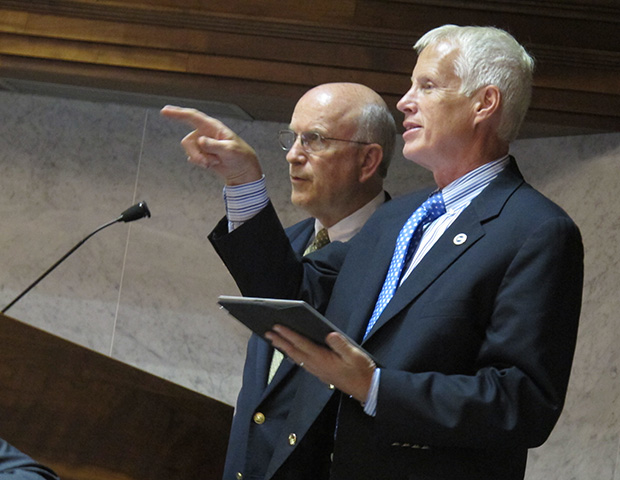 The testing magnate Pearson Education could see their Indiana testing contract extended for an additional two years. Top education officials announced Wednesday it would give Indiana the time it needs to create a replacement for the state’s troubled ISTEP+ exam.

“We need about two-and-a-half to three years to get a new test that is sound, based on our standards, thought out and vetted clearly through the education system,” says Sen. Dennis Kruse, chair of the Senate committee on education. “That’ll [be] a better test at the end of that time.”

Pearson is currently contracted to be in charge of ISTEP+ through spring 2017. The Indiana State Board of Education has the option to renew that contract for an additional two years.

Rep. Bob Behning, chair of the House committee on education, wants the board to extend that contract. If extended, it would leave ISTEP+ in place through the 2018-19 school year.

Without the extension, current law requires a new test to be in place by May 2017.

“Expecting to have an assessment in place by May is, to me, rushing it,” Behning says.

Even though the test would include the same questions and come from the same vendor, if the Pearson contract is extended, lawmakers plan to rebrand the test with a new name.

“The assessment will be similar, but we’ll have to figure out if we want to keep the name,” Behning says. “I don’t think we’ll call the assessment, after this spring, ‘ISTEP.’ I think it will be something different.”

This comes at the end of a tumultuous year for testing in Indiana.

In March, lawmakers passed a law ending ISTEP+ after spring 2017, after critiques of the test’s length, delays in scores and cost. The same law created a state panel to study alternatives to the ISTEP+. That panel recommended that lawmakers extend their timeline, in order to avoid implementing a rushed, botched test in spring 2017.

“The real communication by the panel was ‘Don’t rush it,'” Behning says.